Our house is started! 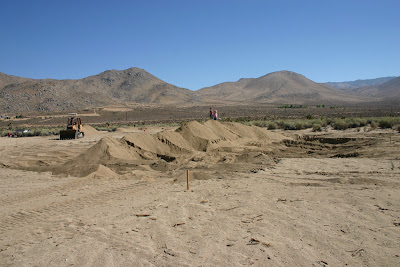 This is a picture taken mid-completion of the initial dirt work. Today it is all level and flat, ready for the footings to be dug. The kids were playing in the mountains of dirt, if you look really closely, you can see Kacy and Will up at the top. This is exciting for us, we have been living in our fifth wheel trailer for two years in August. (August 27th to be exact). Trailer life isn't exactly great, but now that I have more convenient laundry access (no more trips to the laundromat or Bakersfield), and now that we've been on our own property, things have improved. We hated living in the campground. It was weird having different people come in every weekend, and I couldn't let the kids outside. People thought we were weird because we didn't hang outside playing games, bbq-ing and listening to music. It's a little different when you LIVE camping. When it's your vacation for four days you live it up and pull out all your good camping stuff, but when it's your life you try to make it seem as normal as possible. When you have a patrol car next to your RV, there are polar reactions with your camper neighbors. Some come and introduce themselves and try to be friends, and others stay far, far away. In my mind I'm thinking the former are just nice people with a law enforcement relative somewhere, and the latter are the felons. The campground was really nice and I would recommend it to anyone. It was just not fun to live there for 14 months. Our property is awesome. Out in the middle of nowhere. No weirdos. Our biggest worry is the wildlife, which we love. (On that side note, earlier this week Ryan heard two gunshots while getting dressed in the morning for work, and went to check it out. It came from our neighbors who come to their house annually and have a caretaker live there. Ryan drove over there and the caretaker had shot a stray coyote who was ill, he had patchy fur and was acting funny. We never considered that coyotes can carry doggie diseases that may infect puppies.)

Next week is girls camp. Both Ryan and I are going, as well as 5 other family members. I have to get the kids ready for their trips to the grandma's houses too. It should be fun. I'll be gone for a week and I'll be busy there, but it might be a nice break from the daily life of cartoons, laundry, cooking all the time in a kitchen too small. In fact, Ryan and his fam will be cooking for me twice a day! How awesome is that! I am planning to take a biffy box with me- I am going to fill a box with wipees, a little trash can, lysol, and glowsticks for night time lighting. This is mostly for myself, as I plan on showering as little as possible while there. There are no real showers, and my memories of heating water over the fire and then showering in the midst of tarps is vivid. It's not terrible, but since I've had kids and discovered the wonders of baby wipes, I think you could possibly go a whole year stink free and clean using wipees. Hair will be a different story, but hey, we are camping! As I've told Ryan, I should probably make more of an effort to look in the mirror everyday. But for occaisions like camping, my lack of caring about my looks is just right! We will not be here next week to update the blog or anything. I am looking forward to the downtime! I am still a little nervous about leaving the kids for a week, but I know they will be fine with the grandmas. They will have fun.