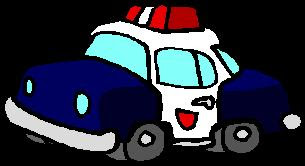 Here are a couple of fun stories, compliments of Ryan. Anyone who knows Ryan knows he has the gift of story telling, and these happened to him, but I am going to share without trying to botch it all up.

Last week, Ryan came home from work late two nights in a row. One night, at 2am, I hear him call dispatch and say "Put me 10-10, I'm out of the mountains now. Search and rescue are there." I THINK that's what I heard, it is 2 am after all. The next morning I ask what the phone call was all about and this is it in a nutshell: A motorcyclist crashed in the mountains. He has cell reception somehow, and called 911. Ryan has the 4x4 patrol car, so he and some Sheriffs go looking for this guy. They called about 10 search and rescue guys who were on quads and dirt bikes to help. There were helicopters involved. It gets really cold up here at night, it was really important to find the guy. The whole idea to find this guy is to have everyone drive to different points in the area and flash their sirens/lights, and he is supposed to call 911 back and tell them he saw something, and they would figure it out from there. Ryan went down a path that was very much an off road path. Steep. Rocks. Down a mountain. Turned on lights, no report back. So he turns around (he has no radio reception at this point with anyone, he's all alone, just him and his Durango)- he starts up the mountain, things are going well, if not slowly. All of a sudden, his transmission goes out. So, the next two hours of Ryan's life from this point consist of winching himself up a mountain. Pull out winch cable, climb mountain, tie around tree, go back to car, winch, and repeat. Winch and repeat. For TWO hours. Needless to say, he hates his Durango and swears we will never own a Dodge. (In his defense, his Durango has been in the "shop" for tranny problems, brake problems, and an airbag thing for four or five months of the 13-14 months he's driven it.) Warn winch company, on the other hand, is his new favorite.

Next night, Ryan comes home at 2am. I am a little more awake this time, and ask if Ryan has been partying. He relates the fact that he has been on the scene on a bloody, bloody homicide/suicide (it was TBD by the detectives) and related his theory to me about what happened. For the best story, ask Ryan. From my point of view, it went something like this: Ryan telling me about the copious amounts of blood. Me feeling a little ill. Ryan saying that the guy shot himself in the head, there was one casing in the revolver, and the shell was in a puddle of blood on the porch, the guy was in the house. A leatherman tool was nearby the shell, maybe the guy pulled the shell out of his head. Me feeling like I'm going to puke. I try not to remember the rest, because it makes me sick- I'm a blood wimp. Anyway, Ryan tells the story, falls asleep snoring loudly, and I lay there picturing this scene, feeling like I might puke. NICE! Oh- as for Ryan's theory about it being a suicide and not a homicide- the guy was found in his living room, the gun was on the front porch with the one casing, and the one shell was on the porch also. Remember in psychology class the story of the guy who had a railroad spike go through his frontal lobe and he still lived? Ryan said this guy probably did the same with a bullet, lost all reasoning, and then wandered around all bloody, doing weird things (pulling the bullet out of your head anyone?) and then bled to death. Ryan has a job I absolutely could not do.