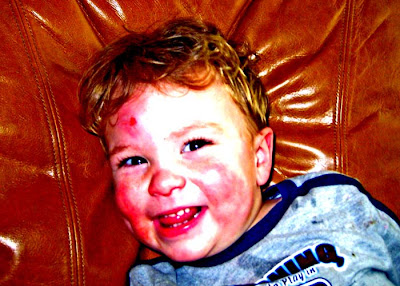 It will be a miracle if Ed makes it to his second birthday. Tuesday night was his chipped teeth. Yesterday at my mom's house I put him in the crib because he had fallen asleep on the way there. I closed the door and went downstairs. I got myself a glass of water and told my mom that she might want to check on him in a few minutes. As I said that, I see Ed coming down the stairs head first. He only missed the last step, but that last step leads to ceramic tile. So, he climbed out of the crib he couldn't climb out of two weeks ago, opened the door, and came down an entire flight of stairs where he promptly smacked his head on the floor. It sounded AWFUL and it freaked me out. He got two bumps on the side of hos head, and I checked his pupils to see if they were both dilated the same. He was fine. Meanwhile, I am starting to run late for my Dr. appointment. (By the way, I get to the Dr. in the nick of time, and I get right in. The nurse took my blood pressure and it was 116/70. She said, "Oh, that's higher than usual." I said "Yea, I was rushing to get here and my youngest kid tried to give himself a concussion just before I left." My blood pressure is usually 100/68... kids and stress. What it'll do to you...) Today the kids were playing in their "room", jumping around like monkeys, and Ed fell over and smacked his forehead on the back of the TV stand. That would be the slightly bloody and very bumpy forehead injury in the picture. The boy is tough. He barely cries- I wonder if he is low on pain receptors.