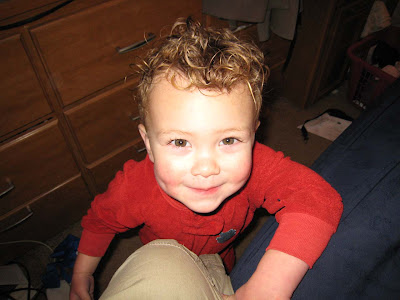 Yesterday was playgroup, and we take turns hosting each week. I volunteered and did "popcorn day" in honor of National Popcorn Day on January 19. I guess I should have done a MLK day, but it never crossed my mind. Popcorn is much more fun and easy to understand when you are one to five years old than a civil rights activist. It was fun, I think... it always stresses me a little because since I've had kids I am lucky to get my act together. I did get the best compliment though- one of the moms who is a teacher and runs the after school program in Kernville asked if I was going to teach again someday because she would like to have her kids in my class. That made my day, really. That was the highlight though, because after that, my day got much crazier. We came home, and Ed was full of fire. Was there crack in the popcorn I made? He couldn't settle down for nap. He climbed out of his crib at least 15 times. I took him outside to Ryan twice, and he ended up thinking that was really great, even though Ryan made it boring for him. Ryan was organizing his patrol car, and Ed thought that was neat. After going back and forth with Ed for 45 minutes, he climbed out of his crib the last time and fell and hit his mouth on the bars. He cried, and I could tell it hurt him, but since there was no blood, I just laid him down and told him to go to sleep. When he woke up two and half hours later he kept crying and chewing on his finger. His sippy cup hurt his mouth, and he couldn't eat. I looked in his mouth, and his two front teeth are chipped, and one was bloody in the gums. I freaked out a little because he couldn't eat, and I've never dealt with teeth injuries. Ryan wasn't home and didn't answer his cell. I called my visiting teacher/friend who is a dental hygienist. I asked Jenny if she would look at them, just because she knows way more about teeth than I do. She and her dad (the dentist) looked at his teeth for me at 6:30 at night. I felt bad asking them to do that, but I did feel much better when her dad said it didn't crack to the nerve. He said what it was (twice) but I forget. Something about a level 2 fracture... So now Ed's front teeth are a little sore and very much chipped. I am going to make some bread and drop it off to them tomorrow as a small thank-you. The demon child woke up at 4:30 this morning and come into our room with us for a while before Ryan kicked him out (thank-you Ryan!) and put him back to bed. He is no longer allowed to sleep in his crib. He is sleeping in between Kacy and Will right now, and I'm sorry for them. He sleeps ON them more than anything-feet in the face and everything.