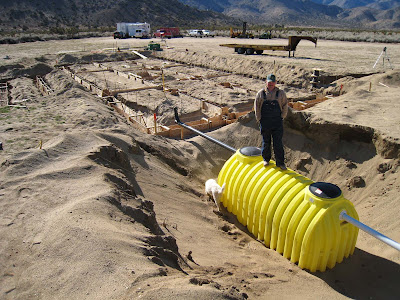 A shot of the whole house and the septic- I tried to use Ryan for scale, but I'm not sure it came across. He is 6'5". The white thing is George. We get to bury the tank now- yea! 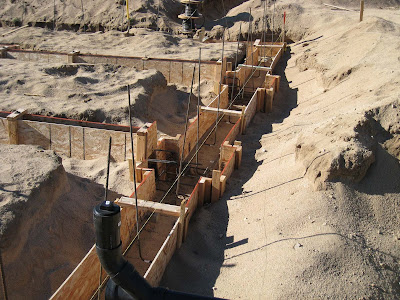 A picture of just part of a form. Lots of wood, rebar, and tying. Sand is the enemy. Honestly, we've lost count how many times we've dug this out. (I use the term "we" very loosely here, it was really Ryan.) 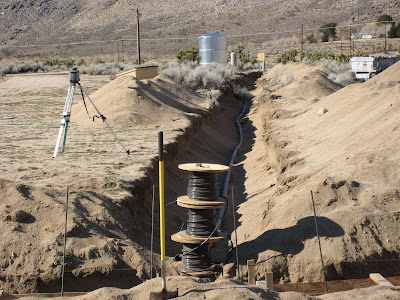 A big ol' trench for three inch conduit. That's what you do when your soil is as sandy as ours is. The trench is four feet wide. FOR THREE INCH CONDUIT. It is also 400 feet long from the spools of wire to the boxes/meter by the well. This too gets buried tomorrow. 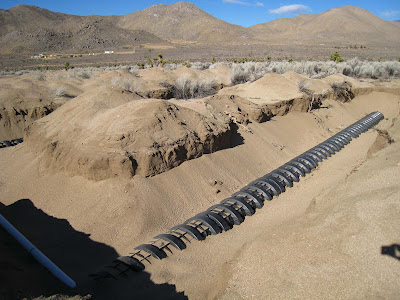 Our leach lines of Infiltrators. The county required two lines at 50 feet each. Again, so happy to cover this stuff up and have flat land in parts again. Not that it bothers us- we have so much acrage that it isn't in the way. But burying it means one less thing to look at and one step closer to having a house. We both cannot wait to fill in around the forms of the house. That should be by the end of the month. The cement trucks and pumper are coming on the 21st, and the masonry wall people we want to hire will come the week after. Then Ryan will start the framing part of the house. We are considering hiring a framing crew to put up the walls and roof. They can get it done in a week, whereas we could get it done in a year. Hmmm... my vote? Framing crew! Then Ryan can get busy with the slow part of it- all the inside finish work- electricity, plumbling, insulation, blah, blah, blah- so much!