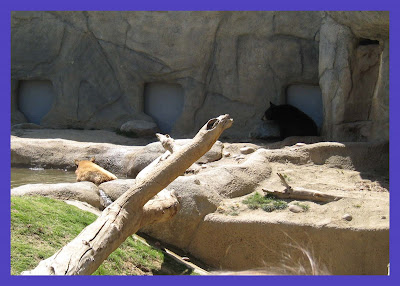 The two bears at the California Living Museum (CALM). Our playgroup went there today, and it was fun. My kids were incredibly well behaved- so much so that I wondered what was wrong with them. I talked to Will (the wanderer) before we got out of the car and explained very calmly that if he did not stay with our group, then we would go back to the car and leave. There were 300 first graders roaming around, and the parking lot was pretty full when we got there. My talk must've worked, or more likely, he just didn't have the spunk in him today. Ed was given the choice by another mom (thanks Mitzi) of either riding in her stroller or holding my hand, and after he realized what was going on, he opted to hold my hand. He didn't even fight me much. We saw bears (above) and all other local animals- racoons, hawks, crows, ducks, turtles, a road runner, coyotes, lizards, snakes, and foxes. Aside from the bears, we have all those animals on/near our property, but it was still neat to see them. The park itself was really nice. Great trees, and everything was clean. I was impressed, and will take the kids again. 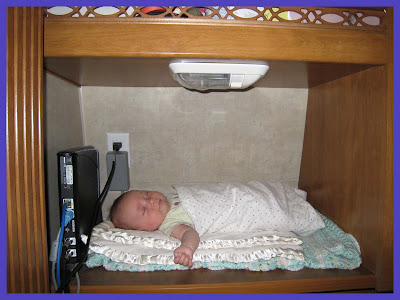 I don't do "co-sleeping". I have never slept with my babies in my bed because I am mental about it. #1- Deep seated fear of rolling over on them, even though I hardly move at night. #2- Their little noises wake me up unnecessarily. #3- I believe having your kids in your bed trains them to be dependent on you helping them to sleep, and because I am lazy, I want my kids to sleep on their own, by themselves, with as little help from me as possible. That's also why after a month or so of life , I try to put the babies in their beds while they are still awake so they don't rely on nursing/bottles to fall asleep. Again, laziness on my part. But I digress. This is Jessie in her bed. It is a shelf next to my bed. Yes, that is technology by her head- our internet modem thingie. Kacy and Will slept in a laundry basket by my bed for about two weeks until they were moved into their own beds (we had a house), and Ed and Jessie get the shelf (in the trailer). This shelf works perfectly because I don't have to go far to get her when she wakes up at night. There is a light right above it, if I need to change her diaper. She is almost too long for it. I think my sleeping theories work pretty well (that, or I just got extremely lucky to have four kids who sleep- very possible). I keep the room dark at night and I don't talk to her. I save the stimulation for day time when she can be awake. I keep a routine at bedtime- bath, lotion, pj's, bed. She is almost two months old an consistently sleeps 8 hours at night. They don't match my 8 hours, but I don't care. All my kids have done this, with the exception of Will, who was three months old before he had an 8 hour stretch. He was also the one who had days and nights mixed up for a solid week or more- nearly killed me.
Posted by Karrie at 8:58 PM