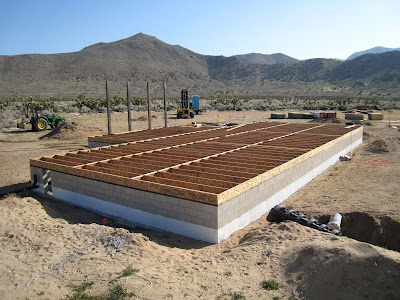 Our house as it is today- the I-beams, rim joists, and the four metal posts that go between our kitchen windows. The post are 16 feet tall right now- they will be trimmed down a little. For scale, the little door in the cinder block is about four feet tall. The long side of the house (the front) is 70 feet long. Under the I-beams in the crawl space will be the plumbing, and the plywood sheeting goes on top. Before the sheeting goes on Ryan has to do the rough plumbing and the metal infrastructure (is that the right word???) for our staircase. Good thing he is an expert welder- besides the normal wood building/electrical/plumbing skills he has- the boy has mad welding skills. Our house has a "fancy" staircase. By "fancy", I mean to say that our staircase hung up our draftsman/engineer for months trying to figure out how to design it so that it meets CA building code and be the design feature we wanted it to be. It will wrap around our fireplace and appear to come out of the wall (nothing under the treads/risers).

I have not been on the Internet much lately because I just don't seem to have lots of time. On the kid front, Kacy is a sponge who absorbs everything she hears. She is continually asking for the definitions of words she hears. She also knows how to tie her shoes, as of yesterday. Who taught her this? It wasn't Mom, Dad, or any other relative. It was Bill Cosby. Actually, it was Little Bill on Noggin. There is a poem: "Make a little loop, what do you do? Wrap the lace around it, and pull it through." There you go. Will is talking like a normal three year old now. He cracks me up when he isn't making me mad. He definitely has great interpersonal skills. Ed is interested in using the potty. He has only an inkling of what to do, but he is showing the signs of being ready to try. For example, he sometimes tells me when he needs a new diaper, and he sometimes tells me he has to go. He doesn't always go, but he wants to try. Jessie gave me my first bad night last night, and even then, it wasn't terrible. She will be a month old tomorrow, and last night she wanted to party, and she invited me! She woke up at 3:57am (yes, I know exactly when I opened my eyes...) and she stayed up until 5:58am. She would fuss every time I turned out the light. As long as the light was on, she was okay. I can't complain too much- she slept 8 hours before that. We just need to shift those hours to when I'm sleeping. George (the dog) is learning how to sit this week. He is a stubborn little thing. I have to bribe him with treats. I did that for 10 minutes yesterday, and tested him today, sans treats. He sat right down on command. I don't like doing treats, but the boy needs it. Ryan is back to work and is continually doing house stuff. I am busy with the kids and my own house stuff- laundry, cooking, etc. I am getting the sewing bug, but I don't really have the time right now.
Posted by Karrie at 5:06 PM