A long day, but not as long as Jocelyn's 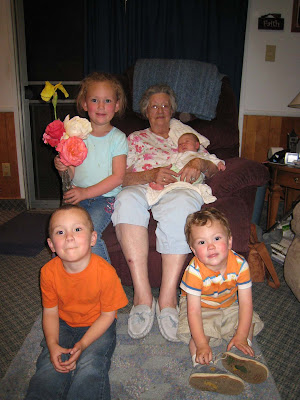 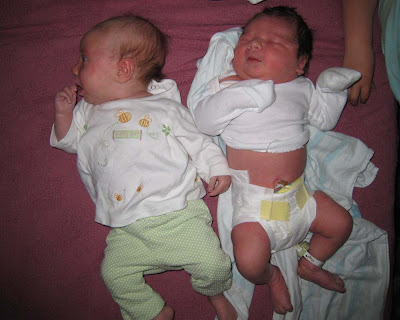 An explanation of the title: Jocelyn had baby boy number four today, at the hideous hour of 4:45am! She didn't get any sleep at night, but when I saw her she looked pretty good and was even able to complete her sentences. We'll see how she is on Sunday- I need to see another newborn mommy unable to think clearly so I feel better about myself. Here is a picture of Levi Henry, born @ 4:43am, 9 pounds 10 ounces, 22 inches long, with loads of hair. Compare to our Jessie, with little to no hair (love the newborn mullet!) and I think he just might be bigger. Okay, so I tried to take a picture of their feet next to each other, and none of them turned out, but I did notice his legs are at least twice as thick as hers. He's going to be a big boy!

My long day consisted of much traffic. I went to Bakersfield today for a doctor's appointment. We stopped on the way in at our friend Jenny F.'s house because we hadn't seen them forever. We didn't see the boys- Clay was working and Caleb was in school. Kacy and Abby played together, and even included the boys. It was a good visit, and I am going to make more of an effort to stop by. Then, it was off to "the other side of town" where I wanted to beat my head against the steering wheel because of the traffic. I hate it. So many people- that's why we moved out of there! I dropped the kids off at my mom's and went to my Dr. appt. with Jessie in tow. After that, I went to our storage unit and found my "in between" clothes and my "skinny" clothes. I found some maternity shirts I had been looking for (too late now) and threw those in my Goodwill pile. I then went to the bank to deposit a check in the ATM only to find I didn't have a pen. I wasn't getting out of the car, so I left the bank with the uncashed check. I went to El Pollo Loco and got some chicken and fed Jessie (and myself) in the car for the second time. I spent most of my afternoon feeding that girl in my car! Got my car washed, where the employees sent me through twice because of the bee and butterfly guts plastered to the front of my car. Gross! I went and picked up the kids and headed to the hospital to see Levi, and get the scoop on Jocelyn's birth story. Then the kids and I headed for my Grandma M's house. They were hungry for dinner, so we went to Taco Bell (at 6:00pm...). There were no less than 15 cars in the drive-thru, so we went to another Taco Bell, where there were only 12 cars. We finally landed at Jack in the Box. Yummy! Then on to a nice visit with my grandma, aunt, and my sister Kendra. Oh- and Will got a gash in his head that could probably use a stitch or two, but being the awesome mom that I am, I put a butterfly band aid on it. I could think of NOTHING worse than taking him to the urgent care on a Friday evening, with Jessie, so that he could scream and kick the nurses/Dr. when they tried to put one or two stitches in his head. Besides, it is on his hair line and any scarring won't really show. (In case you work for CPS, I did have my aunt, who is a nurse, look at it. She said he'll be fine.)
Posted by Karrie at 10:30 PM