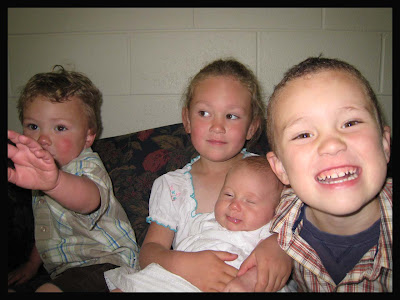 So typical- I try t get a group shot of the kids and 99% of them look like this one. 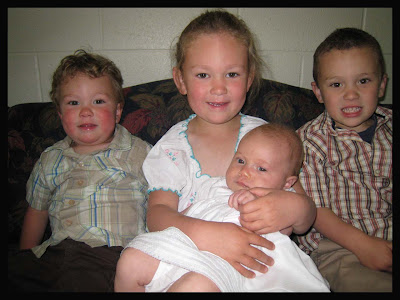 The nicest group shot I could manage before they usurped my authority and fled the scene.


Yesterday was a great day. Both Ryan and I agreed at the end of the day that we were both really happy about the whole thing. Yesterday Ryan blessed Jessie in church. Our entire immediate family was able to be there, and well as one of Jessie's great grandmas, Ellen. We disrupted several people's Sunday's by taking up several pews, which is always funny to me. I've been on both ends of the "that's my bench!" phenomenon. We are such creature's of habit. After church my side of the family came out to our property to see it and the house. Kendra and Michael (and kids) were out here a year ago for Spring break camping, my parents had been out here three years ago before we moved, and Steven, April, Karen, and Jason had never been out here. We had a picnic- kind of. Sandwiches, chips, drinks. It's hard to have people over because mostly you just stand in the dirt. The weather was perfect. After they left, we left and went to Bakersfield for Jocelyn's birthday. We had ribs. Yummy! The kids all played outside, and with a few exceptions, they were good! (My kids were the bad ones.)
We had a busy week last week, and I will post more pictures of it later.
Posted by Karrie at 9:39 AM