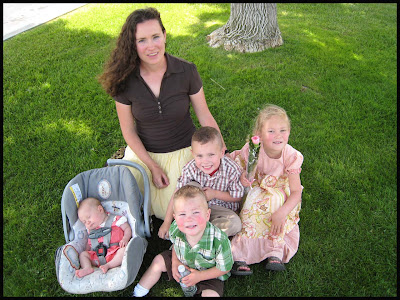 Happy Mother's Day! Here is my annual Mother's Day photo. Note how funny I look, and that I didn't take Jessie out of her seat. This was right after church, she had just eaten, and we had a good hour and some minutes in the car ahead of us. I didn't want to wake her up. At least the kids are all looking at the camera. I have another shot of us where I look decent, but the kids are all looking at the ground. Figures. My Mother's Day started at 2:30AM with Ed running up to our room and me putting him back to bed. Jessie heard us and since we were both awake, I fed her, not for very long though, as she fell asleep pretty quickly. At 4:50AM she woke up "for reals" and I fed her again, and then kept her in bed with me for an hour because it was cold and she kept kicking off her blanket (even with the swaddling-which works SO well to help little ones sleep...) Then at 7:07AM I get up with Kacy and Ed and make pancakes. Kacy says "Mom, what would we do without you?" and I reply in a very sleepy and a little sassy tone, "You would be wearing dirty underwear and be covered in bugs, I'm sure." We get ready for church, and on the way to church Kacy says "Mom, you sure are lucky to have four kids." At church Ryan is speaking, so while he sits up front, I'm in my bench with aforementioned FOUR kids by myself. Sacrament meeting starts at 10:00AM, and at 10:01 Will tells me he has to go potty. I leave Kacy and Jessie on the bench with the lady who sits behind us, Nancy, watching them. Will, Ed, and I go to the bathroom. (Ed HAS to go because he won't sit with anyone else. Fun!) We get back to the chapel just after the opening hymn started. I missed all the announcements. Ed is in fine form since I took the Jolly Rancher that Will gave to him away (he swallows them whole.) Tantrum. Fits. Wailing and gnashing of teeth. I throw the guy some marshmallows. He is still rotten the rest of the time as he sits on my lap. The bread and water are passed around and we go through our "More bread! More bread, Mom!" routine. Meanwhile I'm watching Jessie sucking on her hand and being all alert- two signs she's working up to a feeding. We listen to two speakers, listen to the Primary kids sing their Mother's Day song (which my kids refused to do... punks!) and a flute/piano duet. Ryan stands up to give his talk on "the divine role of motherhood" while I stand up to leave with Jessie who had started to fuss. Will went with the family in front of us, Kacy was farmed out to Dany and Jim in the back, and Ed, Jessie, and I went out. I didn't hear a word of Ryan's talk, which is too bad because he is a great speaker. One of my favorites, right after Jeffery R. Holland. But I digress. Our meetings were canceled after that (as a side note- I think it's a bit of a punishment really, to cancel the last two hours of church in the name of motherhood. I kinda like the little break I get for two hours when Ed is in the nursery and the other two are busy with singing and learning...) We went to my mom's house and visited for awhile, and then went to Ryan's mom's house and did the same. It was a fun day.
Posted by Karrie at 10:24 PM