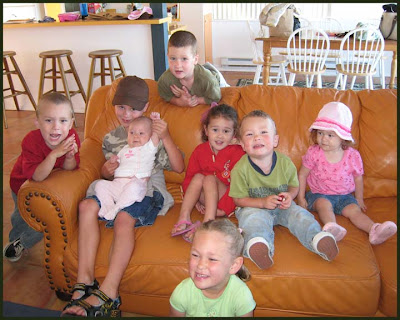 Here is the crew, minus the mommies. My sister Kendra and I took our kids to Cayucos Beach for two days and two nights. We arrived on Tuesday afternoon. I thought my kids were going to DIE from the excitement (I was going to kill them...) they were so excited they were obnoxious. But hey, after an almost four hour ride in the car interrupted by a horrific grocery store experience, what can you expect? We quickly went over the rules of the house (eat ONLY at the table, don't close any doors (ED!!!!), and ask before you touch anything) and then we went down to the beach. The house we stayed at was on the beach- which is fantastic for little kids. The kids from left to right: Will (3 1/2), Benjamin (7 1/2), Jessie (3 mos), Jack (6), Gracie (3), Ed and Sara-Jane (2) and on the floor is Kacy (5). 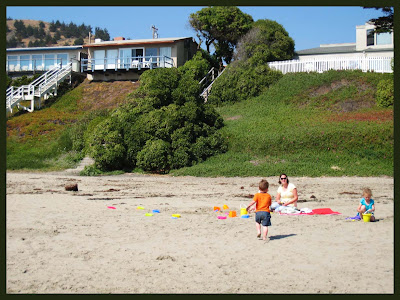 Kendra, Kacy, and Ed. In the background is the house we stayed at. I have stayed in this house many times before through my teenage years, and how I appreciate NOT being in charge. I realized when we walked through the door that all chances of relaxing were gone. It was all for the kids, and as long as I keep that perspective it makes the trip worthwhile. 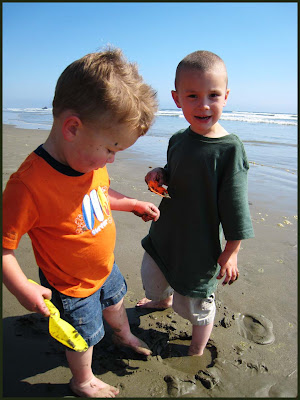 My boys. Lucky to be alive, these two are. (Please tell me this is a phase. Tell me that one day my boys will hear my voice, understand my words, and pretend like they care...) Will left us a couple of times thinking he was going to change out of his wet shirt "ALL BY MYSELF" even though the house was locked up. The worst feeling is looking up and not seeing your kid anywhere. It only takes a minute. Ed was Ed- and the beach was great because there was no place that looked more inviting. There was sand and water, and that limited his choices on where to be, so he stayed relatively close. I had to chase him twice- once when he was chasing birds, and the other was when he was chasing dogs. I got him and apologized to the dog owner, and she said "Oh, my dog won't hurt him." and I said "I'm not worried about him, I'm worried about your dog." (On a side note- Last Sunday Ryan caught him in his parents' neighbor's horse pen, standing under the horse petting him and feeding him apples. NICE.) 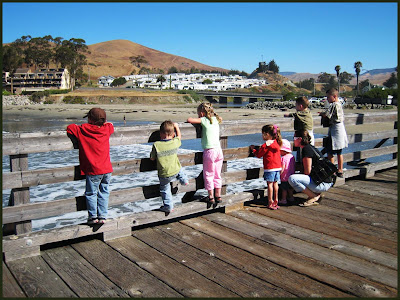 The pier. See Ed in the green shirt? Trying to climb the rails... I think if I reach the age of 32 it'll be a miracle. After the pier we went to Morro Bay and fed the seals at this rinky-dink aquarium that was just the right price and size for out group. The kids could wander around the aquarium and we could see them, so they felt independent and grown up and we didn't stress much. We then went to The Shell Shop and the kids picked out a shell. We walked around a bit by the bay, and the looks we got were fabulous. Almost like we were a freak show. A somewhat well behaved freak show. Eight kids. Two moms. Some people think my sister and I are twins. Probably didn't help. We walked into a restaurant and said, "Table for nine. We need two high chairs. Oh, and make that table for 11 with two high chairs because a friend is meeting us a little later." Hee hee- I bet the waitress nearly passed out when we asked for a table. The kids were all really, really good in the restaurant, much to every one's amazement. (If it was me, and I saw that many kids in a small restaurant, I would've found someplace else to eat...) My friend Kibbe and her two kids met us there, and then we went to Cloister park and let the kids run around while we attempted to visit. It's just hard to visit when you have kids you have to watch. But we keep trying. 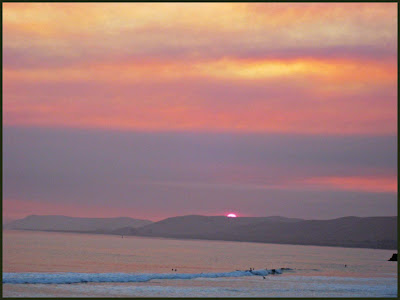 The sunset on the first night. All in all, it was a good trip. If you had talked to me last night, you would have heard me say "NEVER AGAIN". It was hard, and yesterday we left the beach around 10:30am, and we didn't get home until 10:30 pm. We made it to Bakersfield, I went and sat for two and a half hours while I got the windows tinted in my car (Not my idea of a fun time...), and then we rushed to a family party at a park. It was a LONG day, preceded by bad sleep and cranky kids. I'm glad it's over, and like pregnancy and birth, it starts looking better the farther I get from it. Amnesia. Rest. Kids who are much more mellow today because they are exhausted. I may do it again next year. I may not. We'll see how the kids are doing maturity wise. And me. How I'm doing maturity wise. Next summer I'll be 32, if I make it.
Posted by Karrie at 2:46 PM