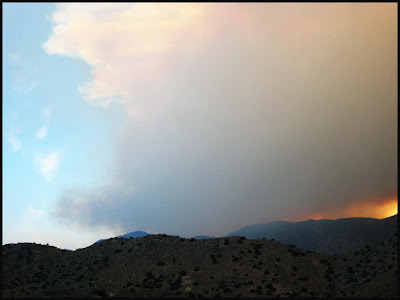 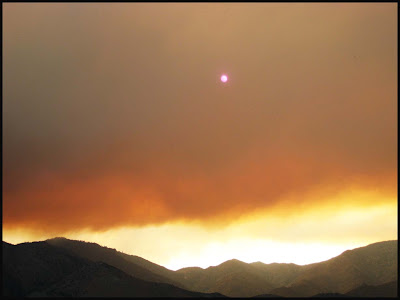 The wind has shifted, and now it is raining ash on my head. Because a stupid person started a forest fire near our property (it's near a lot of folks up here, so when I say "near" I'm comparing it to like living in Bakersfield. And anything I can see with my eyes I consider "near". Like the hugest snake (ever) I "nearly" ran over last night, or the bobcat I "nearly" ran into, and the baby snake I DID run over, all my on my home last night from the most awesome birthday meal EVER- more on that later!) It's not coming our way, so we are lucky there. This fire is out in the middle of nowhere, where there are no roads, no people. There were no thunderstorms. MAYBE a rock fell down and hit another rock and a spark happened and this fire started that way. But most everyone up here says it's arson. It started Saturday night.
Other people in the STUPID PEOPLE category are the four people who have drowned in the last four days in the river. There are no less than a dozen signs within 20 miles in both English and Spanish that say things like "Stay Out, Stay Alive" and "Mantante con vivo, rio peligroso". Some are flashy digital signs. Some are just posted signs. But the signs are there. The stupid part is this: people are going into a river with the name "Killer" in it, a river where the Los Angeles 1984 Olympics held their kayaking events, a river where the rafting companies go on G-4 rapids (Okay, I probably just messed up that rating system, but out of 5, there are parts of the river rated a 4 for fierceness.) On Saturday a guy was in an inner tube floaty, it popped, and he didn't know how to swim... today driving home I had to stop and wait a few minutes to pass dozens of rescue personnel, several news cameras, and they even had the helicopter out. All I saw was dollar signs. How much money goes to retrieve the people who can't swim in the deadliest river in California... I feel badly for their families on the side of the road hoping to find the bodies. It would be a horrific event to see a loved on go under and emerge from the water. BUT IT CAN BE PREVENTED 100%.
Posted by Karrie at 6:33 PM