Background: We have a "red box". It is a sea container that houses some of Ryan's shop stuff. The last few days there has been a funky smell emanating from within said red box. I take out some garbage I had in there. Open the door to air it out. Next day- the stench is still there. Now I face the facts- something has died in there. (Oh how I wish I could say "I have NO IDEA what a dead, rotting animal smells like...") 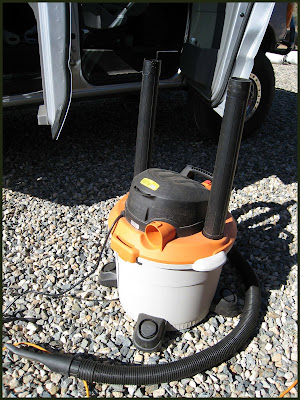 The scene of the crime- the shop vac. How is that possible you say? 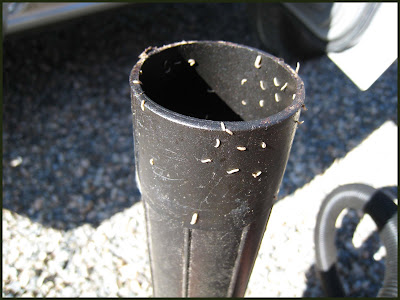 Note the maggots coming out of the top of the extension tube. 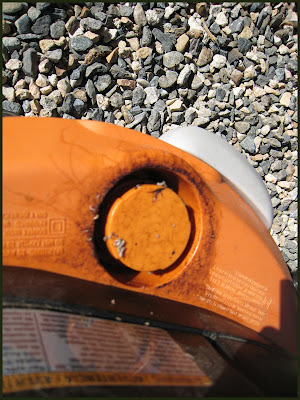 I carefully lift the tube out of its holder, expecting to see something nasty. Instead, I see this slight wetness, and more maggots. Stench is still there. I look in the tube, and see nothing. It's clogged with... 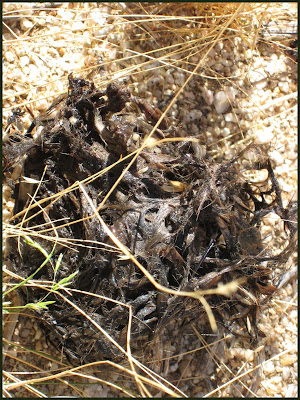 ...this heap of wet, sticky, rotting, black rat/mouse. I flung it in the bushes, of course. LOVE those bushes. (And of course I poked it with a stick. How can you NOT poke a dead animal with a stick? I found it's tail, that's how I know it's a rat-mouse.) 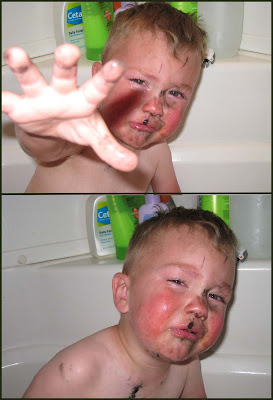 Later in the day, Ryan and I are inside eating lunch while the three walking kids are playing outside. My "mommy-sense" starts to tingle (similar to Spiderman's "Spidy-sense") and I ask Ryan if he can see the kids. He says he can.
"Even Ed?"
"Yes, even Ed. But they are kinda far away." About a minute later, Kacy comes running up to the trailer. "MOM! MOM! The boys are going down the road!" Ryan looks and says "I can't see them anymore." He is just sitting down to eat lunch, I had just finished, so I volunteer to go get them. He says "Maybe you should take the car."
I run.
Far. Very far.
I catch up to the boys about a 1/4 mile away, and good thing for them I was completely out of breath and tired. Good thing. We walk back to the trailer and I tell them to stay in their sandbox, THAT'S IT! No where else. No less than 10 minutes elapse when all three of them come into the house with greasy hands from playing with the semi-trailer hitch. Ed was slightly more dirty, and required a bath with Dawn dish soap. I was in no good mood, but took a picture anyway, because I SUPPOSE it is humorous. Especially since he is crying in the picture. (Heehee- mean mommy...) Let me reassure you (and myself) that we are spending the rest of the day indoors watching cartoons. I'm exhausted.
Posted by Karrie at 3:13 PM