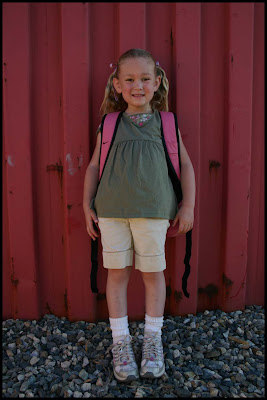 Kacy's first day of Kindergarten. On the way to school she said she was most excited to paint, and she was most nervous about not knowing anyone. When she got off the bus, Will asked her what she did in school, and she said "It's BOR-ing. I can't believe how much boring it is." By the time we got home though, she gave me more details. She made a puppet, colored a paper, some of the kids weren't behaving for the teacher, she got to play with play-doh in the after school hour, and the bus ride was fun. Kacy has a full day program from 8a to 2p, and the buses don't run until 3p. So there is an hour where all the K's who ride the bus stay together and do outside activities and indoor play activities. Right now Kacy is in front of the TV because she's tired. The tedious part of this school year is going to be the bus ride- her bus stop is five miles from our house. I get reimbursed, and I don't know the details of that yet, but that will help ease the pain that is driving that far for a us stop. 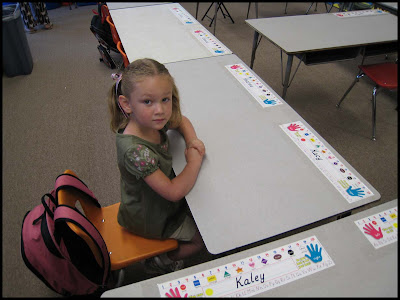 In her classroom, she is going to sit next to a girl named Kaley. I have a cousin Caley, and when Kacy and Caley are in the same room, everyone gets tongue tied. I noticed there was also another Caylee and a Katelyn. 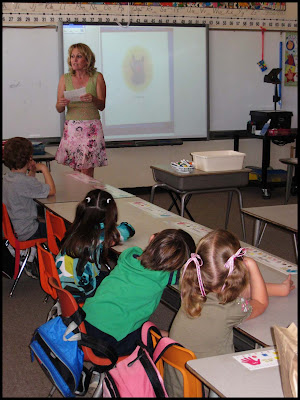 The teacher invited us in for a half hour to talk about what was going to happen, and then she read "The Kissing Hand" as an exit strategy. Kacy had no problems saying good-bye, and neither did I! It was weird having her gone all day, and Will has never talked so much. When it was time for a nap, he said "What about Kacy?" and I told him she was at school and that she would have a rest time after her lunch. He said "Oh. Can I sleep on her bed?" (She has the top bunk. I let him sleep there.)
I watched the other kids come in, and their parents. It was VERY interesting. I've always been a little worried about Will being a bit immature for his age, and I told Ryan that if I didn't think he was ready for Kindergarten next year, I would hold him back at home and then send him when his closer to six. However, after seeing some of Kacy's classmates, Will is going to be just fine. Great even. My favorite was a kid named Joseph. He came in, saw some baskets of toys, and went over to them and in a loud voice said "Hey! These are cool, I'm going to play with toys!" and he started banging them together. Banging them, not playing with them. Poor teacher. I have great expectations for my kids (all kids).
Posted by Karrie at 5:04 PM