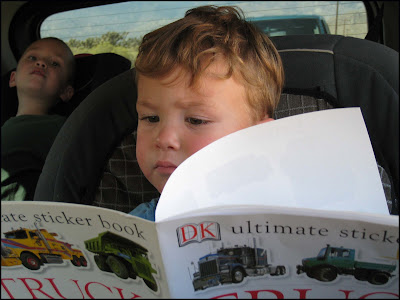 While waiting for Kacy's bus this afternoon, I looked in my rearview mirror and saw Ed concentrating on this book. He was so intent upon his studies that he didn't even notice me turning around and taking his picture. I see the light at the end of the tunnel with his behavior, and I want to dance a jig of joy. But I'll wait until he's potty trained before the jig comes. He comes back now about 90% of the time when I tell him to. So nice! And his first instinct is to no longer RUN when his feet hit the asphalt of a parking lot. Sweet relief! He is still a two year old, and with that comes some fabulous tantrums, but those I can deal with. In fact, I find his tantrums highly amusing. Seriously- he threw a fit yesterday morning when I asked him if he wanted a donut or pizza for breakfast (it was a long weekend for us...). He said "Donut", so I give him a donut. "No donut, mommy! I want pizza." I take the donut and put pizza on his plate. "No pizza mom! Donuts!" This went on for a full ten minutes. I didn't participate after the second set of switching- I had clothes to iron. I can hear him going back and forth, yelling at me (I'm outside ironing...) when I come back in, he is happy with both a donut and pizza. Kacy and Will solved his problem. He is so funny- his speech is blossoming faster than I've ever seen in a kid. So fast- but that's him. His favorite songs are "Bullet Train" by Choo Choo Soul, and "Seven" by They Might Be Giants. He loves to sing. I recently saw him eat a non-food item, say "Yucky" and then spit it in the trash can, not on the floor. I love to hear him say "Look mommy! It's an excavator!" I also find it humorous when I tell him to do something like "Ed, get your shoes." and he'll say "No thank-you mommy." or, "Ed, stop picking your nose." "No thank-you."
I just had to tell Will to stop licking the mirror. Kids are so weird! Seriously, if I'm not close to pulling out my hair, I have tears flowing from my eyes because I'm laughing so hard. Life is funnier with kids. And you know, I am rarely away from my kids. Hardly ever. I was away from them most of the day Saturday while I went to the temple in LA. They stayed with cousin Caley and my Aunt Kristin (and my cousin April popped on over too...) and knowing that they were safe and happy made me able to relax, and I was SO happy to see them. They didn't want to leave, so the feeling wasn't mutual, but I'm confident enough not to take it personally! I really do love all my kids, even when they can sometimes frustrate me. But I think that's normal, and as they grow up, so do I.
And can you believe it---I was in charge of sharing time in Primary on Sunday, which means that when the kids are together I had to teach a lesson to them all. The main idea was that God hears our prayers no matter what language we speak and that he knows all of our names, and that we have many things to be thankful for. I used a song from the children's songbook, and I sang it a capella in front of the other leaders, teachers, and kids. This is a huge thing for me, because I am not a singer. I remember when Ryan and I were first married I was the Primary chorister, and I was in there with two other girls who could really sing. And the pianist taught choir in the schools. Everyone could sing but me. It took me a good two years to get over myself and realize that the kids don't care how you sing. They just want you to. We sing all the time in our family, and the louder and more off key I am, the harder the kids laugh. Want to see Ed laugh so hard he snorts and blows snot bubbles out of his nose? I'll sing "John Jacob Jingle Heimer Scmidt" to him the next time I'm around.
Posted by Karrie at 4:52 PM