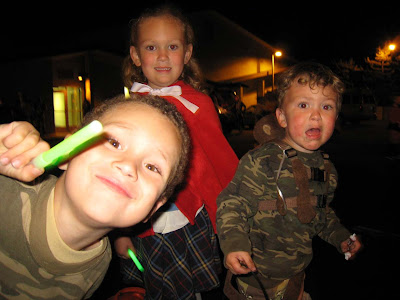 I am just grumpy. Knowing that, let me say that I could give Halloween away. Only because of this: it is just one more event that reminds me I don't have my act together. I didn't sew any great costumes, I didn't buy any great costumes, and the kids don't really look like they dressed up. Kacy was Little Red Riding Hood, and she looked the part. The boys wanted to be Army guys, so I bought them desert camo pants and tees, figuring they could wear them again. Kacy likes to dress up, but the boys freaked when I put the new clothes on them. What is with them? I'm afraid they are a bit like me- they don't like change. New clothes=change. They were all REALLY good at the Trunk-or-Treat though. Ryan had to work, so it was me and the kiddos. Kacy took Ed around to the cars and they got their buckets filled with candy. Will wanted me to go with him, but I couldn't as I was passing out the candy. My car decorations were lame. I have issues. Kacy was perfect- she helped with Ed, and then politely asked me if it was okay to stay in the parking lot and visit with her friends. I nearly choked. I'm not that surprised, but it just showed me how she's growing up and I like the direction it's going. Of course I told her "yes," how could I not? Will stayed and helped me pass out candy. He caused me no grief about running around. Ed was on his monkey leash, and besides his wardrobe malfunction (his pants were too big and spent most of the night around his ankles...), he was great. He ate four hot dogs (not the buns), and then sat in the back part of my car with his candy between his legs, eating away. Jessie spent the night in my baby backpack watching everyone. I kept thinking "Is this worth it?" All the scrambling, the not so great costumes, the calories? I got my answer on the way home when Kacy said "Mom, I had a lot of fun tonight. I can't wait for next year. Do you think next year you can make me a princess dress, but without wings? That would be the best." Next year she's going to be a princess, and the boys are going to be Army guys again. Except next year they'll carry guns. It make it seem more complete. Or a helmet? Flak jackets?

**Unrelated mommy moments I want to remember- Today in the car, Will was sitting up front with me. He was playing with the mirror and said "Hey Mom, see those bumps on my tongue? Those are my taste buds. That's how I taste food. See? " (Picture it- go ahead- a four year old who didn't brush his teeth this morning, but DID eat orange candy pumpkins in the car, sticking his tongue out as far as possible.) Then he said, "Hey Mom. (It's always Hey Mom.) What's that thing hanging down in the back of my throat?" So we got to have the uvula conversation! He thought it was so cool that milk could come out of your nose if the hanging down thing didn't do it's job. He said "Ah ha ha- that's cool! And gross!"
Last night in the car we were listening to George Strait and the song said something about "in love". Kacy asked me what that meant, so I told her it was a love different than how you love Mom and Dad, a love like you want to marry someone. She leaned over, touched my arm, and said in a quiet voice "Mom, Spencer says he is in love with me." I said, "Who?" She replied, "You know, Spencer. He says we are going to get married someday, but I don't love him that way. I love him because he's my cousin. Mom, who AM I going to marry?" I thought it was cute that Spencer is holding out for Kacy (he's got EXCELLENT taste), and I was impressed that Kacy knew the difference.
Posted by Karrie at 8:39 PM