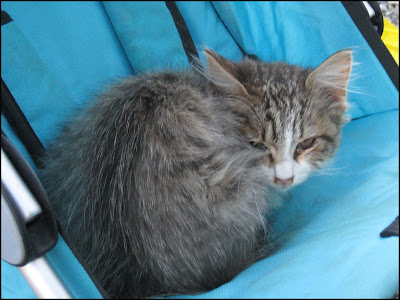 It's official-we have been adopted by this kitten. This sounds so weird to say, but I was SO shocked to see this kitten in our little yard. I have seen many critters, and this is the most shocking. Probably because every other critter I've seen has some sort of scary self defense thing. I'm seriously so surprised that a coyote didn't eat it. Last Friday this cat (it doesn't have a name yet) showed up and hasn't left. The poor thing has been HANDLED by the boys. Ed was holding it around it's neck, running with it, while it's poor body was swinging wildly from side to side. Then he puts it down and the dumb thing rubs all over his legs. Kacy wants to name it Cutie Pie. Right now it's just called That Cat. Both Ryan and I are allergic to cats. I never thought I was a cat person anyway, but you know, I like the independence. I have enough dependents right now. It is not allowed in the trailer, and we are going to feed it just enough to keep it around. It's our first "barn cat". I want it to live under the trailer and catch all the mice and rats and keep those nasty things out of my trailer. It shouldn't be hard to catch them- I've practically stepped on the rats. I know that sounds gross, but really, they aren't the nasty power line rats. They are actually kind of cute. Really. I wouldn't want to hold one (eew-germs!) but they don't freak me out.

***Updates***
Jessie moves around the trailer by laying on her back, arching her back, and pushing. She slides on the back of her head. She also has her second tooth in, and is again sleeping through the night. It seems like every one of my kids has an 8 month old "thing" where they stop sleeping through the night. I think it's because they start moving around so much while awake, and they start doing it at night, too. She now just rolls over onto her belly and falls back asleep.

My preschool project is under way. I won't bore with details, but I am determined to get this thing going. It seems perfectly reasonable, and I'm working with a good principle. Meaning she is giving me creative independence for now. There is so much to learn, and right now I'm concentrating on learning codes and regulations. (So boring!) I e-mailed the principal to tell her what I was up to- I've almost completed a rough draft of a program description. I need her input before it's finished. Next will be the financial stuff. That's a headache already- it makes my head spin. I hope to have the framework for the entire program completed by the time Christmas Break is over. Then I'll be ready for the grants that open up in the spring. If you are wealthy and want to talk to me about donating money... I'm here for you. :) I was thinking a neat fundraiser would be a duathlon or a century ride. We've got the scenery for it. We've got the roads. I've got the phone number for the biffys. I've never organized a sporting event, but I think I could do it with a good committee. We've got the lake, and some awesome dirt trails for either running or biking. I've often wondered why there wasn't a triathlon up here. I'll have to think about that one. That could be a good project to organize for the next year. Maybe May? Who wants to be on the committee?
Posted by Karrie at 2:45 PM