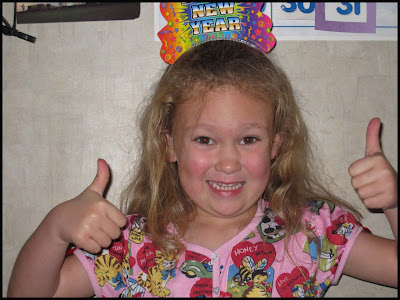 Kacy's biggest accomplishment for 2008 is starting Kindergarten. She is a great student, and an awesome big sister. Her favorite color is still pink, and her favorite food is macaroni and cheese, "but not the orange kind in the box. I like yours, mom." Her favorite thing to do is go outside on the playground at school. She is really growing up, and is a good example to her brothers. She is entering that school age goofiness that is so annoying and so funny at the same time. Ah, the memories! 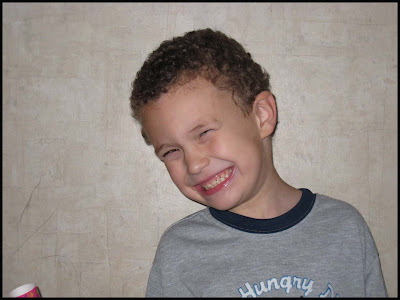 Will's big accomplishment for 2008 was improving his speech all on his own. He still sometimes sounds like an auctioneer with how fast he talks, and sometimes you still need some context clues. But mostly, he is doing so well! And he is one smart guy, even though he doesn't let you know it (like a certain sister). He's observant and loves babies. His favorite color is green, his favorite food is little hot dogs (I would have said ice-cream...) and his favorite thing to do is "help my dad to build on the house." 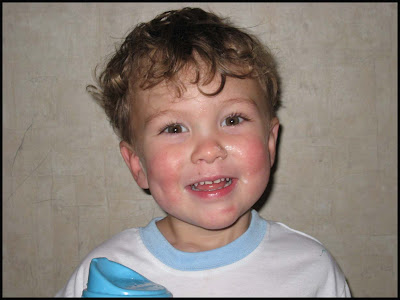 After a rough start, Ed has managed to keep all his teeth in his mouth, and has avoided any trips to the ER. He went from chipping his teeth climbing out of his crib, to sleeping like a big boy in his own bed, and it only took 10 months! (Heavy sarcasm with the 10 months thing- that was a LONG time.) He is so- Ed. His favorite color is red, (although on Christmas day he fought over the blue flashlight and the blue robot... hmmm), his favorite food is doughnuts, and his favorite thing to do is "play in my bedroom." That's funny- he doesn't really have a bedroom. He doesn't seem to know the difference, which is another good reason to be in the trailer while they are young. 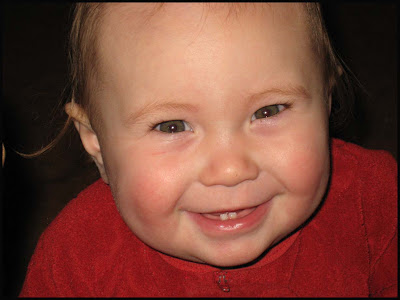 Jessie's big accomplishment for the year was being born. I'd say that was a pretty big thing- she's growing up so fast. I'm enjoying every minute of her. She's a proficient crawler, is starting to pull herself up on things (mostly to her knees) and has all but scrapped the baby food. Her goals for next year include walking, and growing at least two more teeth (uppers would be nice) so she can enjoy more table foods. She told me this, of course.

Ryan (this is me speaking for him, having not talked to him about this): another year down on the highway patrol, another year down as the YM president, and another year building the house. This is the year things really got rolling. He wants to go gang-busters and build like there is no tomorrow so we can get the house finished by the end of the year.

Me: I was talking to the Principal's husband about living in a trailer while building a house because he did it to, but only for one year. She told him we had four kids, and I said "But we only started out with two." He just chuckled and said "Well, life happens I guess, whether or not you live in a trailer." And he's right. It might be a little different and quirky, but what doesn't kill you only makes you stronger. Whoo-hoo!

Tonight the kids and I had a party. We used toilet paper for the streamers (because I forgot real crepe paper...) had noise makers, headbands, and watched the ball drop. We had little hot dogs and macaroni and cheese for dinner. (Is it still macaroni if you use corkscrew pasta? I'm not so sure.) We made a confetti cake. We danced to Pat Benetar's "Heartbreaker" and "Hit Me With Your Best Shot". I set the clock to EST. Ed kept saying "This is the best party, mom!" only it sounded more like "Dis is da best potty, mom!" It was fun.
Posted by Karrie at 9:10 PM