My thoughts on the "most important day in history!" 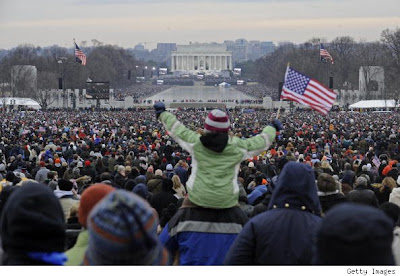 Really? THE single MOST important day in history? I can think of MANY other important days in history that have impacted many more people...
I THOUGHT we were a "colorblind" society. I grew up hearing that term, and about how unfair it was that my ancestor's were white and THAT is why I had an advantage in high school. But now? A "black" person is the president, so THAT should all be absolved. The "white" man oppresses no more. So, I'm happy the ACLU will lose some of it's rhetoric. Maybe because I grew up in California, where there are people of all shapes, sizes, colors, and languages, I just don't see it as a big deal. So what if he has a better tan than me?

I'm so dang conservative that many Republican politicians don't suit my taste. So, keeping that in mind, here's what I don't like, in no particular order:
Things I like:
So, on this "most important day in history" I am feeling morose. I will keep on, keepin' on, but I'm waiting for a president who says: "I'm not dressing up for no stinkin' ball. We're having a BBQ. Ribs, chicken, corn bread, and lemonade." And "it's freezing cold outside, so you 2 million people get smart now, and go home where it's warm." And I'd like to see not the military give a 21 gun salute (or whatever it is), but have the president get his own rifle and salute himself. Mostly, really truly, deep down in my heart, I'm thinking "Well, it won't be any worse for me, because I live in California. I probably won't notice any changes." Except for the national welfare system. I propose that central California become it's own nation. (Think about it: Access to the sea, almost ALL of the current nation's ag industry, some oil... we would be set!)

Last thought on ALL POLITICIANS: Not one of them will EVER answer a reporter's question with "Yes" or "No". NEVER. Ever.
Posted by Karrie at 8:08 AM

Email ThisBlogThis!Share to TwitterShare to FacebookShare to Pinterest
Labels: politics