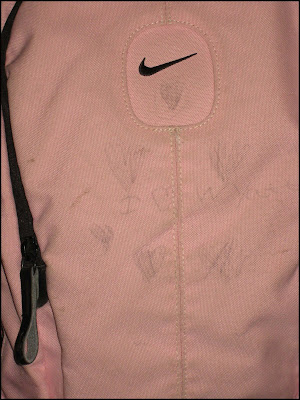 Kacy's back pack as I saw it tonight, hanging up where it's supposed to be. Isn't that nice? Take a close look though. Can you see it? No? 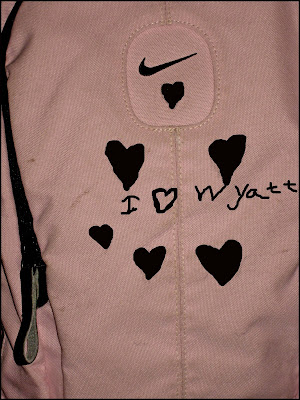 Let me help you...
Okay, I just picked myself up off the floor. We have talked about this before, Kacy and I. Just the other day in the car she told me she loved Wyatt. I asked her why, and she said "Because he wanted someone to like him, so I said I would." I told her she wasn't allowed to have boyfriends yet, and besides, you should like someone because YOU do, not because they want you to. After I tell her about the no boyfriends until you are 18 thing, she says "Okay Mom." Then she turns to Will and tells him that she has a secret and not to tell Mom. She then writes in her notebook "I love Wyatt." Will says "Mom! Kacy has a secret!" in that truly little brother, teasing kind of way. I ask what it is, and he says, "I'm not telling!" (Oh great! I was counting on him to be my snitch!) So, in my "mommy-has-super-powers" way, I say "What is it? That Kacy loves Wyatt?"
"How did you know?" she demands.
I then proceed to turn up the radio and ponder my little girl. She didn't like what I had to say to her about boys and no boyfriends, and instead of blind obedience (can you buy that somewhere?) she continues her way of thinking in secret. I'm considering my options. Will as a snitch is obviously out of the question because those two are close. As I see it, that leaves me one choice: Ed. He's tough. He's observant. He has loyalties to no one. He loves his momma. He's smack dab in the middle of my pack so he can keep tabs on ALL of them. I'll call him "The Intimidator". It's a done deal.
Posted by Karrie at 9:41 PM