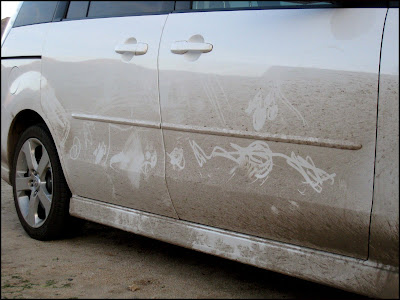 Driving around with this on my car is both humbling and an honor. It means I live in the country where it snowed/rained last Sunday which caused the creek to flood the road in the usual spot. It means I have abandoned all hope at a shiny car for more than half a day. It's an honor to have such thoughtful, intelligent, dirty children- who else but little genius' would think that writing on Mom's car in the dirt, giving me "clues" to wash it, would make me so happy?

Although, the BEST was the day Ryan went to work in his patrol car with "KACY" written all over it. It makes a cop look tough with hearts drawn in the dust of his car.
Posted by Karrie at 9:58 PM