How can one close a head wound? Let me count the ways! 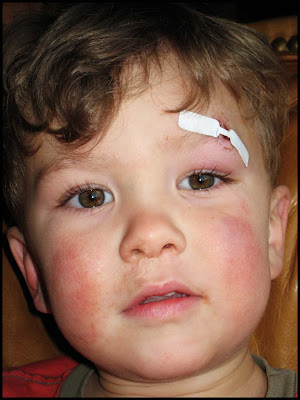 Ed sustained a head wound at church yesterday. Story: He refused to go to primary. He hung out in Primary with me. I sat down to play the piano and he ran out the door. My friend (who shall remain nameless because she feels horrible about it and I don't want to cause her anymore grief) went to chase Ed because, of course, he ran out the door. Well, she ran out the same door, and while the door was being opened Ed was running INTO it. The edge of the door clocked him on the noggin. It gave him a bit of a swollen eye, and a smallish gash that needed some medical attention. I took him across the street to the hospital, where a doctor used Dermabond to seal up the wound. Was I bothered that no gloves were worn? A tad. Anyway, after one and a half hours in the ER, he was glued up and we went back to the church for play practice. We then went to Bakersfield to visit with the family and while there his wound opened up again. I used a butterfly bandage to close it up, but after talking to Ryan, I took him to ANOTHER ER in Bako because of the nasty scar factor. This ER also has an Urgent Care attached to it, so we were triaged into the Urgent Care. That was NICE. The doctor there put in three stitches. That was NOT FUN. They mummy wrapped him in a sheet and a nurse and I held him down. He kept screaming things like "I don't like doctors! I don't need to see a doctor!" and my personal favorite "I not broken! I not broken don't fix me!" He HATES being restrained. That trip only took 2 hours (including driving time), and I'm grateful it was pretty quick! This morning he woke up and we showed Ryan his stitiches. He ate breakfast, and then when I set him on the potty, I noticed his stitches fell out. He only had three to begin with, and two of them are gone. It's not like he ripped them out- it looks like they were never there. Maybe the Dr. didn't tie the knots good enough? He'll probably have a gnarley scar, but it's in his eyebrow. Plus, he's a guy, so it adds "character", right? I really don't want to drive 1.5 hours again (one way) for a hideous doctor visit.
Some Sunday emergency room observations: