Saturday is a Special Day... 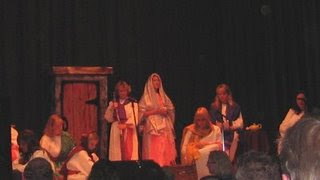 This picture is stolen from another blog- Thanks Cori (and your mom for taking it!)

I am the one that looks like I should be haunting someone... and why do I look so huge? I'm like a giant! (I'm the giant one with my head covered, in case it wasn't obvious.)

Saturday started off with a mad dash to Bakersfield for the FARA fun run. It was fun- even though I didn't run. I took Kacy, Ed, and Jessie with me. Will stayed home with Ryan and ate a half dozen Lofthouse sugar cookies for breakfast and then helped Ryan torch some metal on the house. We barely arrived on time, because kids make me perpetually late. I had Jessie in a baby backpack- I love those things. We were at the back of the group, since I knew we'd be walking. My friend Gabby wanted to run (Go Gabby!), so she headed to the front, while Angie, Dany, Amy and I stayed behind. The lady running the thing says "On your mark, get set, GO!" while we were talking, and Ed was off like a rocket. Dany ran with him, and she estimates he ran about 1/4 of the way before heading back to find us. She was a good sport for chasing him. He was a good sport for running! Dany and Angie ended up power walking ahead of us, and Amy and the kids and I walked. Kacy kept up alright (she says she's never doing it again), and I alternated giving Ed rides every few minutes (Ed wants to go again). On her way back, Dany took Jessie in the backpack, so then I just had Ed. I carried a good 70 pounds for almost half way, and now my arms are sore. I am looking forward to doing another next month, except I'm not taking kids. I so could have jogged that thing! I hear there is one on April 25th.

The play went well, I suppose. I've heard lots of "I was impressed." and "I was pleasently surprised." Hey- us mountain folk put on a pretty good show! :) I don't really know about that, but I'm glad it's over. Like Cori, I am releived it is over, but I DID learn some stuff. Like, my heart will not quit, no matter how nervous I get. My breathing does, however. I remembered most of my lines. I had my debut/retirement solo all in one night. Ryan said I sounded "great." He's never heard me sing, and he's in my club of people who will tell me my butt looks big in my jeans, so I guess I should take that as a compliment. Still, I have a really hard time believing it. Funny for me- during the rehearsal on Friday night I got tired of standing and plopped myself on the floor. I was listening to Leslie H. sing her song, and Angie (the narrator and director) comes over to me and tells me I should sit on the floor for the play and think about whatever I was thinking because it made me look "soulful". What was in my head? I was listening to Leslie sing thinking "I stink. She sounds so good. I should quit."
I didn't quit. And I'm glad. It all turned out okay in the end. Even if it was a really difficult thing to do. Looking back a good 48 hours later, it almost seems easy and painless. Like giving birth. It hurts for a little bit, then you kinda forget.
Posted by Karrie at 6:13 PM