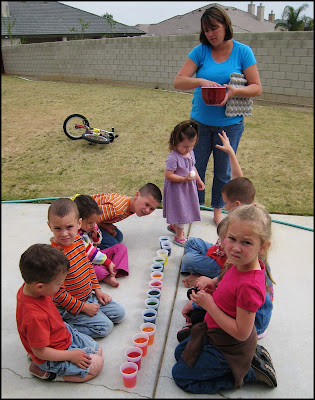 We went over to my sister's house to decorate eggs and cupcakes yesterday. The egg decorating went alright- nothing fancy. Fancy is for only children. Or children over the age of 8. We were simple. One color for most of them, a few with two. The kids LOVED it. They also decorated cupcakes- sort of. After seeing how each kid decorated their first one (the ones who didn't automatically take a huge bits out of theirs, anyway) the cupcake bakers decided to let the kids eat the one they had and THEY would decorate the rest, because it was just too, too gross. Not only were they ugly (No Martha Stewart genes apparent)- they looked like they'd been licked and had booger-fingers poked in them.
Will came up to me with part of the top missing from his cupcake. "Look what I accidentally did, Mom."
"Oh, what happened?"
"I don't know?" (Smiling HUGELY)
My cousin April pointed to the cake crumb on his lip, and said, "Um, Will, are you sure it was an accident?" while laughing at him, and then we were all laughing at him. He was trying SO HARD to look innocent, but that huge smile just gave him away. Well, the crumb didn't help either.
Posted by Karrie at 10:38 AM