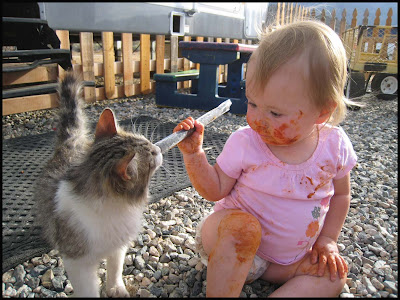 Jessie had enchiladas for dinner (for reals! Even if it looks like it is mostly on her body!) and was sharing an Otter-pop with Steve the cat. Steve disappeared on my birthday. We had three theories: 1) He hitched a ride in the Scnieder truck that delivered our insulation, 2) He ran away, 3) He became coyote dinner. Number one is plausible because he liked getting into vehicles. Maybe all the french fries on the ground trained him a bit to look for open car doors. He could have ran away, as we have a neighbor across the street and up the hill where he supposedly came from. Maybe he wanted to return home. But, I doubt it. Number three seems the most likely because last night when Ryan was tossing and turning (and tossing and turning... ugh) and he got up and went outside, there was a coyote RIGHT THERE. Like, by our stuff. We do have a lot of coyotes around here, so it's not surprising. But we are now thinking that our fluffy little killer was eaten. Too bad, as Steve was a great rat/mouse/snake/lizard/chipmunk killer. He enjoyed Friskees cat food (in small quantities so that he'd be hungry for mouse), and a little milk every now and then. He was annoying when he'd rub against my legs, but he was very tolerant of children. Such is the way of a barn cat... maybe he should've stayed in his "barn!"

(I don't really care about the cat, as he was equal parts cool and annoying. It's kinda just country life- and I don't think we'll get another one (even though Steve found us, as a stray) until we have a fence to keep the coyotes out. Now, if George died, I'd be more upset losing my running buddy. Plus, training puppies is such a pain, and George is finally NOT a puppy!)
Posted by Karrie at 10:42 AM