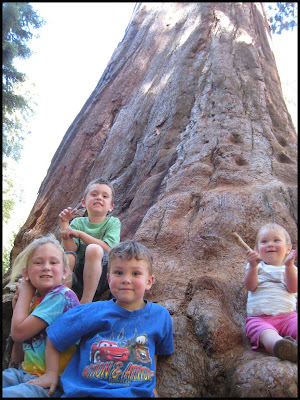 Tuesday after a slip n' slide playgroup, we went to the Trail of 100 Giants. It was fun! We stopped at McNalley's burger shack and got some expensive burgers and fries. (Read: the cheap girl in me thought it took too long to get a burger that cost way too much for what it was...) Then, on up the mountain towards the giant trees. They were beautiful! And so, so huge. Duh! The kids had a good time. The trail is paved, and Ed wanted to "Go fast on the race track like Lightning McQueen!" and tore off. By the end he was running out of steam... everyone had a buddy, and Ryan R was assigned to Ed. Poor guy... he did a great job and I'm grateful for his fast legs to chase my speed demon. Will took the post as leader of the pack... very independently being the first. I had to yell at him a few times to stop and wait for the rest of the group. Kacy hung out with everyone, walking along and taking it all in. Jessie took turns riding in the baby-backpack, walking, and being carried by Tayah B. I was exhausted... I have decided that I was so tired because I was dehydrated. There was a lot of sweating going on prior to the trip, and it wasn't exactly cool up in the trees. All in all, it was a good trip. I'd like to take the kids again when they get a little older, and when it's just slightly cooler. The winding road wasn't too
bad, but we do drive the canyon LOTS, so my kids might be immune to curves. What I learned: next time, bring regular backpack with drinks and little snacks to keep kids from whining, and also bring bug spray/sunscreen.
Posted by Karrie at 9:43 AM