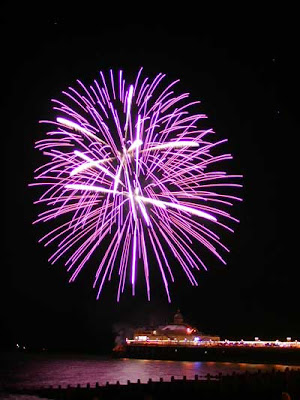 Not OUR fireworks, but pretty anyway! 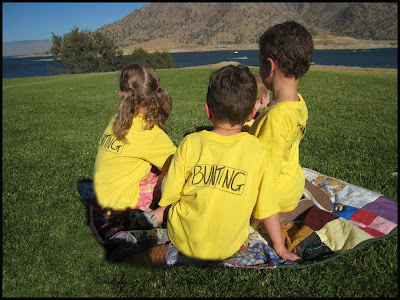 For the Fourth this year we went to the "Law Enforcement" party. I've only been once before, and after talking to Ryan, we agree that there were fewer people there this year. It was still fun! We got there at 5:30 pm. The kids ate food, played on the grass, and bugged the Reiswig boys. My boys thrive around other boys. They become different animals- Will especially. I guess that's the time he gets to be "all boy" because all of a sudden he's karate chopping and punching with the best of them. Nearly FOUR hours later the fireworks started. They were great. I rarely get all patriotic feeling because it's so hot and late in the day, but seeing the ariel fireworks over the water made me think of canons and ships and how grateful I'm not in battle right now. I'm glad to live in America, where I can get my meals supersized if I want to. Well, that and all the freedom of speech and religion and all that! (No, really- I love that last part more than the supersizing. I never supersize my meal, because I'd get unhealthy fast! But I'm grateful that I can if I want to!)

The kids had fun- There were a lot of ooo's and ahh's and "Bingo!" That would be Ed. Ed also sat next to a friend of a friend. This friend was probably 10 years old. Ed would say "Whoa! Did you see that one, Bobby?" And, "Bobby! That was awesome!" I leaned over to Cori and asked her if the kids name was Bobby. It wasn't. It was Josh. And he never corrected Ed. Good sports with my punks, I tell ya!

Oh, and the labeled shirts? We all wore yellow. The kids had our last name on theirs. It made it easy to keep track of them. Next time I am NOT wearing my matching yellow shirt (it doesn't have my name on it...) because I figure the next time my three year old drops his shorts so he can show his friends his cool Thomas undies, I'd rather hide.
Posted by Karrie at 8:09 PM