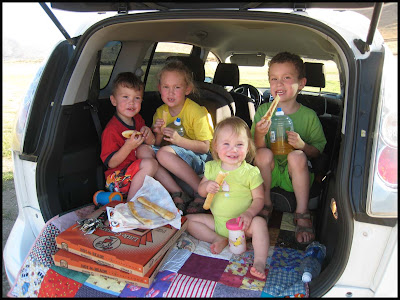 Picnic-ing in the back of the car! (And saying "cheese" with pizza in their mouths!) 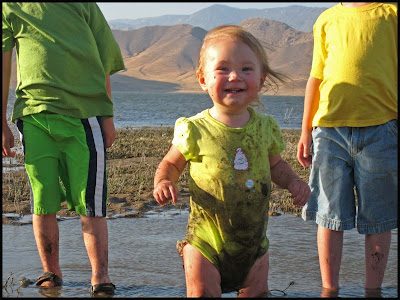 Jessie LOVES the water. And apparently, she loves the mud, too. She had mud in places no baby should have mud in. She had a nice long bath when we got home. 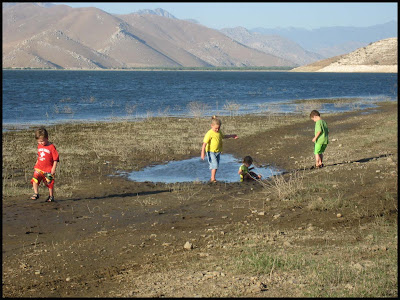 "Hey kids, let's go to the lake! Um, that's not exactly the lake..."
While, not exactly spoken that way, we did go to the lake because we were in town, and our AC doesn't like to work when it gets hot. We donned swimsuits and sandals, picked up some pizza, and went to the lake. (I dare you to cook inside, or even make sandwiches, when your trailer is 95 degrees inside. You would be a hardier soul than I.) We went to a little cove that was mostly deserted. On the plus side, there was no glass or nails to step on. On the down side, there was plenty of mud. There is no beach at our lake. It's a reservoir, and it's volume changes so much that the shoreline alternates between grass, mud, muck, and finally water. My kids picked this fine mud hole to play in. The real lake was kind of weedy on the shore, and after one slimy weed touched Kacy and she screamed, "Eeew! Seaweed! I hate seaweed!" while marching ashore, the kids decided the mud hole was great. We nearly lost Jessie's shoes. There were no real bugs to see. It kept them occupied for an hour... so in my book, despite the nasty mud, it was good! The three older kids didn't get too muddy except for their feet. They mostly threw rocks in the water and slid on the mud. They also made muck-pies, and started rhyming words with "muck." It started because we have a book called "Stuck Truck" and the truck gets stuck in the muck... you can see where this is going. Luckily, it didn't go there, and I'm grateful.
Posted by Karrie at 2:03 PM