I borrowed a lens from cousin David. I wanted to try one out before I spent any money, and I'm glad I did. I borrowed his 50mm 1.8, and the verdict is: I'm not sure if I want it. I love the fuzzy background and low lighting requirements. I don't like getting close to people to take their picture. I get weirded out and really self conscious when I know a camera is pointed my way. So, I automatically assume that others do too, and I feel awkward taking their picture. So a telephoto lens of some kind might be better. I'm not sure. AND, I don't know if it's David's lens, or my perfectly novice-slash-horrible photography skills, but most of the pictures just turned out blurry all over. The auto-focus on the lens would lock up every now and then, so I switched to manual focus, but then it was too dark to see what I was doing properly. (He did say something about dropping it on a log while using the lens to start a fire at camp one year... but it's probably just me!) I'm going to practice some more. Here's the result of the first 24 hours of having it. Two locations: Eric and Kimi's wedding reception, and Ryan's parent's house. 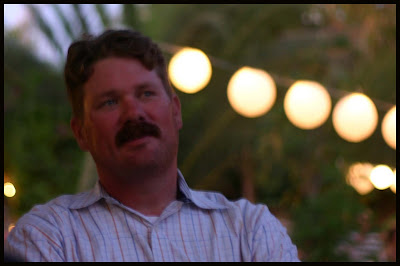 Cropped picture of Ryan. Hubba hubba! Love the fuzzy lights, but I don't like how they look like they end in his head. And, it's blurry. This one is cropped. Full photo below! 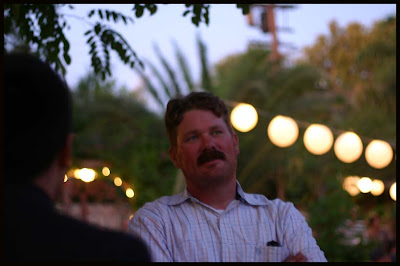 I was trying to hide behind this guy. I don't know... 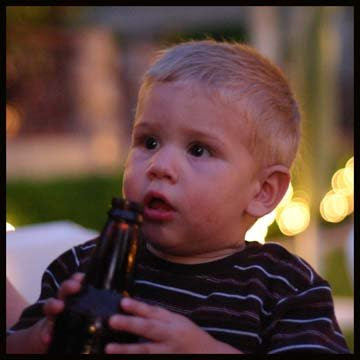 Levi and his rootbeer bottle... I did crop out parts of Jocelyn that because she was missing her head... again, like the fuzzy lights in the background, but Levi is blurry. I might need my glasses though... the words on some cards I was reading yesterday were blurry, too! 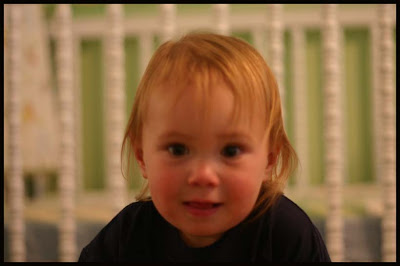 Jessie. Blurry. Fuzzy. Not. In. Focus. On a side note, this girl is not nice in church anymore. Not to me, anyway... she like to screech and be noisy. And she wants to run. It didn't help that her dad spoke in church yesterday and she kept trying to get his attention. 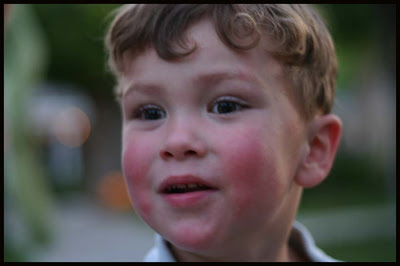 Ed. Ed is photogenic. He's a twit, too, but oh-so-cute-in-pictures. He bit Jessie's fingers today, for no apparent reason other than they were by his body. I was at a loss of what to do, and I get frustrated thinking I need to do something "right now" while it's fresh in his mind, because if I wait too long then he'll not make the connection. I had lots of ideas going through my head, all of them mean. I took his goldfish crackers away, saying he was mean and mean boys can't have treats. He about had a mental breakdown, with wailing all the way home. (We were in the car...)

Back to photography: I learned that even fuzzy backgrounds need to be chosen- you can only fuzz a less than nice background so much. (Read: people, A/C vents, a messy room... still show up as they are, just a little blurrier!) And, I don't like getting so close to my victims. It might be a personal problem. I'm going to the beach with the kids tomorrow, and I will experiment some more. The beach should have some good opportunities for nice backgrounds... I still need lots and lots of practice- I'm not artistically inclined and I have shadow issues. But, I'm not giving up!

Now, off to clean the trailer, the car, do some laundry and get ready for our day trip tomorrow. Hoping for some fog and cold weather...