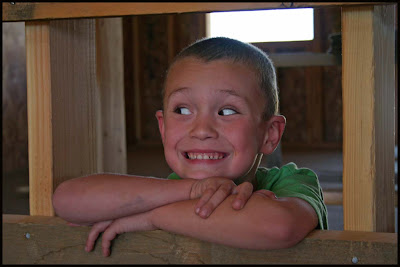 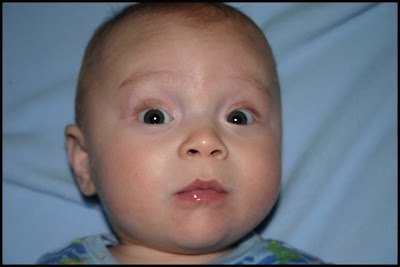 Will around four months old... he was such a GREAT baby. He was my worst sleeper... he consistently woke up once a night for eight months. He also had his first two weeks mixed up... I was TIRED. He has had a funny trait since he started eating solid foods around four months old... if he doesn't like it, he gags. A real gag... almost involuntary. He still does it... he was eating an English muffin with peanut butter on it for breakfast a few weeks ago and gagged on a piece. He spit it out in the trash, because he said there was a piece of lettuce on it. We don't even have lettuce in the house. He got his first tooth when he was 11 months old, but that didn't stop him from eating almost everything (not veggies). 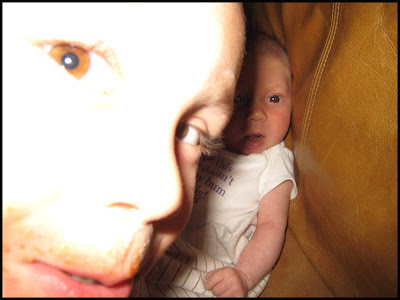 I have LOTS of pictures of Will like this- he is constantly sticking his face or hands in front of the camera. This was when he was three and a half... that's Jessie on the chair. 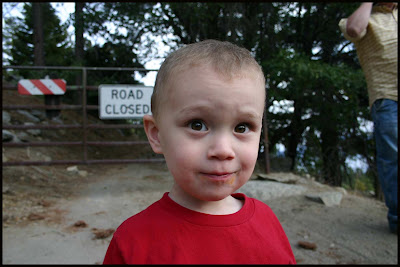 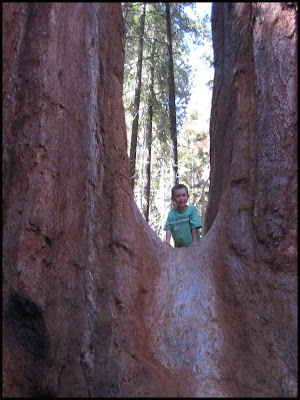 Will is loving school. Kind of. He says it's boring and he hates drawing, even though he does a good job at it. I was worried about him starting school, but he is doing really well. He can sit in his chair, and even though he says the work is boring, he still does it. He hates waking up in the morning. His favorites include: all things Legos (LOVES Legos), helping Dad, Carhartt jeans, playing outside, Frosted Mini-Wheats, and chicken burgers. He is good friends with Kacy, and they both play really well together, and fight, equally. He wanted to have a birthday dinner at Aunt Gaye's house. She graciously hosted... when I asked him what he wanted to do for his birthday four months ago (when Kacy and Ed were talking about their birthdays) he said "I wanna go to the beach!" and then the next day he told me he changed his mind, and that he wanted to go to Aunt Gaye's house. And he's been counting down ever since. When he opened up his present from his Grandma Bunting, we got to hear a few "Whoa-ho-ho! This is AWESOME!", and then when he came to the new clothes, he said, "Oh, and here's the boring part. But THIS (a toy) is AWESOME! Look at it!" Will is good for exclaiming his excitment.

Will is growing up and turning into a boy that can be trusted. He is getting to be a good listener. In primary, he no longer comes up to me with every little thought/problem he has... he can sit in his chair and listen. He is a genius when it comes to solving problems... seriously he's got his Dad's skills there, which always impress me. Happy Birthday Will!
Posted by Karrie at 9:10 AM