We have busy the last few days... more busy than I care to be. Two days in Bakersfield gathering dinner supplies for our ward's 50th anniversary party. Kelly Kent did a fantastic job making a yearbook on lulu.com and putting together a slide show. Ryan's end of the deal didn't go quite as planned... first, he had to trade shifts with Danny R. because the schedule was already out when he was asked to do this thing. So he worked in the morning, and right when he was supposed to get off, he got into a pursuit. He was two hours behind schedule, which put the dinner an hour behind... I don't think anyone was upset about it, but still, we hate telling people to be there at 6:30 and then not being ready until 7:30. Hopefully the food pleased everyone. There was BBQ chicken, ranch rolls, baked carrots, rice pilaf, and for dessert, peach cobbler. Ryan had a kitchen crew- Jimmy, David, and Jason P. came up to help. I had to rig a screen for the slide show... that was time consuming. It was 96 sq. feet of painters canvas. It required some sewing, lots of ironing, and painting. Funny (NOT) story about the paint... I get ready to paint the thing white, instead of natural, and ask Will to take the quart of paint outside. He goes running off with it, and while I'm on my way following him, he comes back to me saying "There's been an accident." I tell him no accident is as important as getting Ed back inside the building... but Will is being persistent. Then he starts crying about how bad it is and that he didn't do it on purpose and THE LID FELL OFF AND THERE IS PAINT EVERYWHERE. I run over there and sure enough... just as I was staring at the mess, thinking "How in the world am I going to clean this???" Mindy comes in to see if I had sunscreen. She was across the street at the park. She comes over and says, "Well, should we wipe or dab?" After just a few minutes Jenny K. comes in to help. She ended up bringing her shop-vac and with lots of water, towels, and that vacuum, the paint came up. So after spending an hour on the paint I got started painting the canvas, and that was a huge pain in the neck. But, all's well that ends well, no? 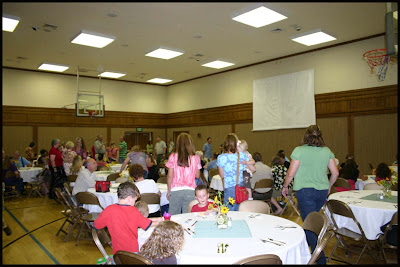 The gym before the party started... there's the screen! I still think it needs to be finished more- repainted so that it is all even. I'll put that on my list of things to do. 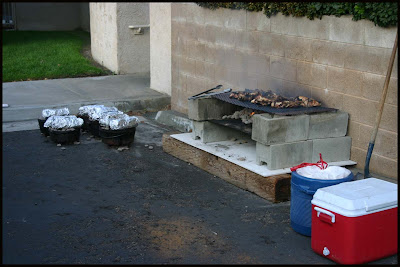 The FOOD! I don't know where Ryan was at this moment- running around somewhere trying to get things ready to be served. Ice chests full of chicken legs and thighs in the brine (note: legs and thighs, although extremely tasty and inexpensive, are difficult to cool for 130 people), dutch ovens full of ranch rolls, foil packets of baked carrots, and a parking lots grate BBQ- let's you BBQ and have coals ready at the same time. Easy to disassemble and take someplace. 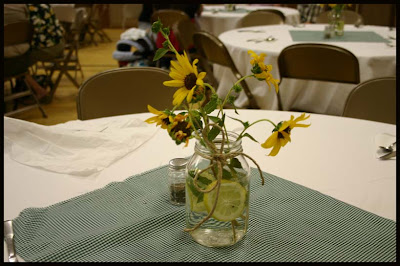 The centerpieces- my kids got a hold of this one already. I liked the sunflowers- I did not like getting them. I was wearing highly impractical shoes (flip flops) standing in the weeds on the side of the highway with a kitchen knife hacking at the wild sunflowers. I felt like a criminal, taking flowers that grow on the side of the road. I kept waiting for my biologist neighbor to pull up behind me and tell me I was ruining the ecosystem of the highway by removing stalks of sunflowers... We did what we thought people 50 years ago would've done to decorate. My feet got itchy and I was hoping the flowers would last the 7 minute drive to the church. They barely made it- they are surprisingly delicate. Of course, if someone hacked at me with a dull serrated kitchen knife and then threw me into a car full of car seats, I wouldn't look so good either. 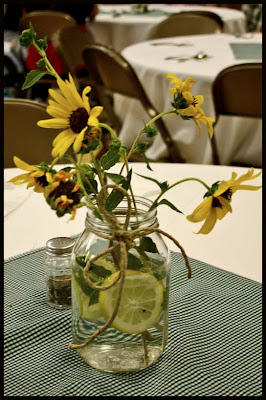 For my amusement, an edited version of the same picture.