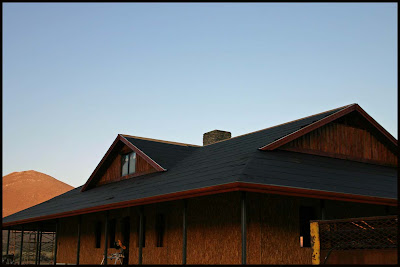 The siding is all up on the gables. It is Ponderosa pine board and batten, and the picture is a little dark. I'll work on it... maybe take a picture when the sun is shining on the house. I was a little busy making dinner at the time. The black stuff is the felt paper that goes under all roofs. It makes the roof look so dark... fun fact: it's not finished yet, and 25,000 staples have been used. Anyone able (and willing) to walk around on a 6/12 roof for a day during the week, let us know. I'll make you a fabulous lunch if you help my hubby put on the sheets of metal roof. 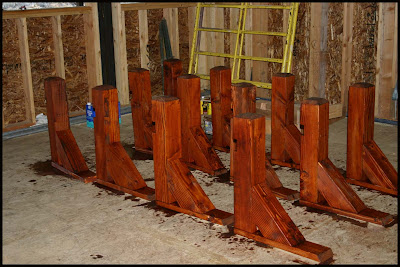 These things look funny right now, but they go on the gable ends to help hold up the fascia. They are corbels. Ryan made them today. There will be three on each end.

I'll tell you what, there is no short list of things to do on the house. Just when you think you are ready for the next big step, three sub-steps pop up that you didn't really think about, or that could be better done before the next big step. A lot of people ask me if our roof is on yet. They've been asking for awhile, and I just say "nope." I don't really explain that after the roof sheathing there is the drip flashing, the siding that needs to be put up, and stained/oiled BEFORE so the roof doesn't get nasty, a chimney that needs to be completed both externally (the rocks) and internally (the actual chimney pipe, that needs to be ordered online...), the chimney topper needs to be designed and fabricated (by Ryan) and then installed, and the roof jacks for the plumbing vents need to be done. And, okay, a lot of things on our house don't "have to" be done. They are being done because dang-it, if we are going to live in a fifth-wheel trailer for four+ years, then this house is going to be a hand-crafted piece of work. The chimney topper? You don't need one. But it sure will look good! And we'll be able to pass down a legacy of craftsmanship. "Your grandpa built that." "See that right there? Your grandpa nearly sliced his hand off putting that up." (Not really. Yet.) "See those doors? Your grandpa and I went to some nasty place in Los Angeles and got a good deal on them. I refinished them." And on and on. And the point will be that two ordinary people were able to do something because they believed they could. And the grand kids will roll their eyes to the heavens, and think about our legacy. A legacy of lunacy. And when our boys decide to follow in their grandfathers and father's footsteps, I'll pass along the copy of my blog to my daughter-in-laws and say, "See? You can totally do this."

(I'm planning our "four year anniversary in the trailer" party. I'm in the pre-planning stages. Hey, I know! We'll roof the house to celebrate. Who's with me?)