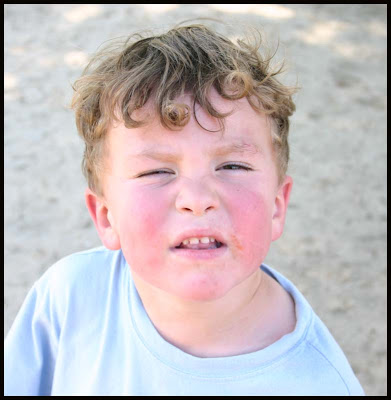 I enrolled Ed in preschool down in Bakersfield. He will be going once a week, and this time will allow me to consolidate my errands into one morning, and only have one child with me. It benefits him because he is a stinker. I'm hoping a little time in a structured environment where he has to listen to other people's rules and obey will help him... cuz I'm about to sell him! He was doing so well; he seemed to be growing up and not running in the parking lot, and not running in the store, and not running up and down the trailer... being nicer to other kids, not running out of nursery on Sundays... and then the last few weeks have gotten more and more frustrating for me. There are moments when I wonder if he needs a pill of some kind to just calm him down a little. He is right on the edge of that fine line between active little boy and ADD/ADHD... he may even have his pinkie toe over the edge of that line. This picture of him was taken when I picked him up from preschool. He didn't want to come home. He is so excited to have a school of his own, and a lunch box. He just wishes he could ride a bus, then his dreams would come true. He escaped his classroom once, apparently it was before the school portion started. The director said "He has no fear, does he?" I used to work at this PreK while in college, and know some of the staff already. I warned them all. This boy is so smart, and so active... I'm not sure what to do about it. I thought maybe making him walk/run outside would help, but it doesn't. We walked two miles today, and he came in, had some fruit salad (yummy, yummy!) and was back in full force.
Maybe I'm the one who needs a pill.