We had parent-teacher conferences this Wednesday. I had to take all the kids with me, as Ryan was working. Last year, that was a disaster. This year went much better, in part because I went in the middle of the session, and in part because the principal sat with the kids for a little while. Ed was very active, but at least he stayed in the cafeteria. Afterwards I let them play on the play ground. You have not lived until you have seen Ed play tether ball by himself. I'm still laughing. Here are the results of the conference: 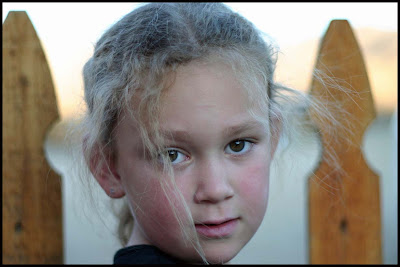 Kacy's teachers started the conversation by saying that the only reason they come to work is so there is an adult in the classroom. They said she is very helpful, knows what she needs to know, and says interesting things. (This could go two ways...) Like, "My Dad used to be a cowboy. But he had to quit when he married Mom." Both Ms. O and Mrs. C (from Kindergarten) wanted to know why he had to quit. (For the record, he quit before we got married and was getting out of it when we were dating because being a cowboy doesn't exactly pay well. Unless you happen to own a ranch. Which he didn't.) Her progress report had the following comments: "Kacy is making excellent progress in all academic areas. She is like a sponge...absorbing everything we talk about. Kacy likes to help other and likes to be a leader. She is well behaved and is excited about learning something new everyday. Keep up the good work!" 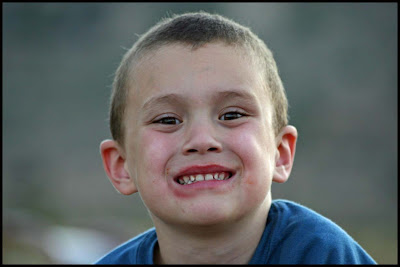 Today Will is sick, and I think it kind of shows in this picture. His eyes look tired. Anyway, Will's teacher was very thorough and went through all his tests with me. He missed one on his math test, and exceeded expectations for the reading/writing test. I told her I was thrilled (yes, THRILLED!) that he comes home and asks for a pencil and paper to write with because he has never been interested. His comments on his progress report says, "Will is a joy to have in class. He is very sensitive and I have to make sure that he always gets his chance to voice his answer or he gets his feelings hurt. he is very patient waiting for me to call on him and always lets me know with his eyes when i have forgotten to offer him a turn. I can really appreciate this about him because he keeps me on my toes to make sure that everyone is recognized and that their opinion and input is important. Thank you, Will!" In other words, his eyes fill with tears. And doesn't she sound like THE Kindergarten teacher? She's good. She's the picture of Kindergarten, except she doesn't wear wooden holiday earrings or jumpers. 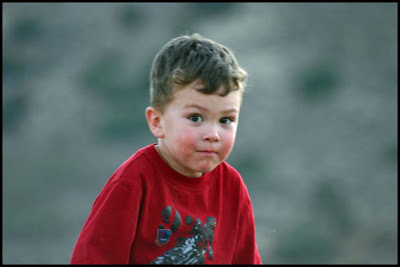 The report from preschool and myself concerning Ed is the following: Improvement at preschool! Three weeks in a row of him going without a fit. He LIKES it now. Two weeks of him falling asleep on his cot during nap time. This is great news! He kind of has had attachment issues with me- for as tough as he is, he loves his mom and wants to be with her always! So this experience has been great so far. Too bad it's in Bako and 70+miles away. He was horrible on Sunday at church, but has been pretty good. When he's not a butthead, he's SO FUNNY! Yesterday morning he was taking off his pajama shirt and got it stuck around his head. He says, "Uh, Mom? A little help here." In the car he asked me if we could do a "power."
"A power?"
"Ya! Like dad does!"
He was talking about a power slide. That a fun thing that Ryan knows how to do involving the parking brake and throwing the back end of the car all willy-nilly. The kids LOVE it. 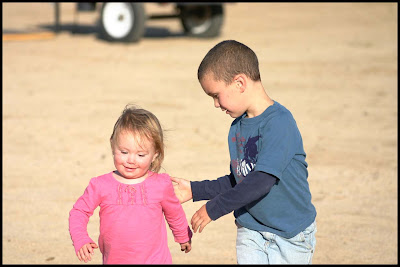 Jessie is just a good kid. She gave me a hard time in church on Sunday, too. I will never bring mini marshmallows to church again. She has a new found love of cheese. Almost an obsession. She likes to go grocery shopping, and loves to give the kids hugs when they get off the bus. Yesterday she scolded Ed, pointing her finger and saying, " N0-no, Eh." She also does this this lip thing looks like her aunt Kendra. She likes to cuddle with me, and is her dad's biggest fan.

As for the parents- we are hanging in there, doing the best we know how. Ryan is busy with too many projects. A few of those should pass soon, though. We are now giving no date to have the house done. It'll be done when it gets done... we go between two train of thoughts, and variants on those trains. One, is to get the house done fast and move in. The other, is get the house done right, even if it takes a few more months. You can get right and fast together, but it costs more money than we have. Because we'd have to hire people. People are expensive. So, we plug along. And we try to enjoy the process. Some days are definitely more enjoyable than others. But the overall feeling is good, and that's what important. Life is good, and when the house is done, it'll be worth the wait. (Because we are NOT moving into it until it is all the way finished. It's too hard to work on a house when you live in it.)
Posted by Karrie at 10:10 AM