I got a note home from Will's teacher yesterday, and a phone call from Kacy's teacher, each stating that the kids were getting an award at the assembly today. Excellent! Of course I was really excited, because I'm a school nerd. I love school. It makes me happy to be at school. (I wonder why? Seriously, now I'll have to analyze this aspect of my personality.) Here's what they were and what their teachers said about them. 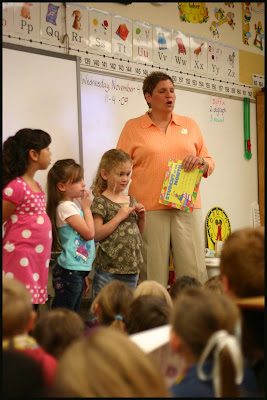 Kacy got Student of the Month, I think. Her teacher said that Kacy could run the classroom all by herself. She's not bossy, but is a big help to substitutes that come in with how the routines are run. She said that Kacy has a large and interesting vocabulary and is interested in words. She and the little girl next to her, J, took the STAR test for the Accelerated Reader program and both of them scored in the 1.7-2.7 grade level. She also said that Kacy is kind to others and helps them with their work. (On the reading thing, I found out Kacy could read for reals on two separate occasions. Two? Yup, I'm a little slow sometimes. One, when we went to the library last month and she picked out a book and knew 75% of the words. Then at church when she got her speaking part for the program, she started reading it to me and knew almost all the words except achieve, attending, and participating. It was a jaw dropping moment. I can't wait until we can read books at the same time! Harry Potter here we come! *in a year or so*) 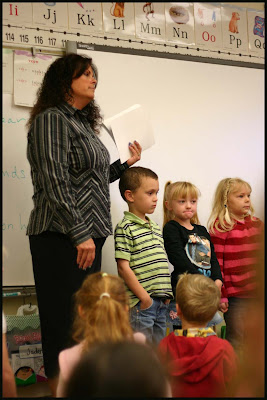 Will got the Most Improved award. His teacher said that at the beginning of the year he hated coloring and writing and would say things like "I can't" and "It's too hard." But now he loves coloring and is very meticulous in his work. He stays focused on getting all his work done neatly. He also has excellent citizenship, following classroom rules and being kind to others. (I almost cried. I was so worried about his emotional immaturity when he started school. Of course, I almost cried when the cute girl in the stripy sweatshirt got an award for Student of the Month. She can read already. Her parents have been making a word book for her since she was little- way to go parents!) She said she can always count on Will for being trustworthy and honest. On a side note, when I went to his class yesterday, the teacher's aide told me that when it was her birthday last month, that after they sang to her, Will came up to her and told her that the next time he had a birthday and got birthday money, he would give some to her for her present. I am so pleased with Will because he has improved his fine motor skills SO MUCH and has taken an interest in school.

My other two side kicks were well behaved during the event. I am so happy with that- could life possible be getting less stressful because Ed sat/stood/lay down on the floor next to me the whole time without exiting the room, or running around the room? Wow. I'm still astonished. Ed and Jessie LOVE going to the school because Karen in the office always stamps their hands. They love those stamps!
Posted by Karrie at 10:01 AM