This Veteran's Day was spent fulfilling one of Will's dreams- decorating a cake "the cool way." For his birthday in August, he really wanted to build a cake of his own. We just can't do that in the trailer for several reasons, the least of which would be lack of oven/counter space. Our friend Cori happens to love to decorate cakes "the cool way" too, and offered to have Will come over and have a go at it. It was fun! 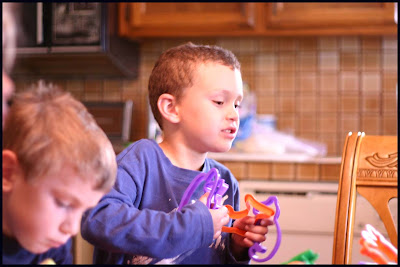 Will deciding on a theme for his cake- we had to rule out a four foot high building at the start. He decided on an ocean theme with blue water and sea creatures. Then, it was time to color the fondant. This is where Will left and Kacy stepped in. Will didn't want to get his hands blue. Kacy didn't mind coloring fondant, and she started hers with pink. The fondant Cori makes (herself!) is marshmallow based. (It was already made, so I don't know how to do it myself. She might share the recipe under an oath of silence on my part... I haven't asked her yet. I am curious though, and if Will is going to keep up with his dream of being a train driver and cake decorator, we'll have to learn!) 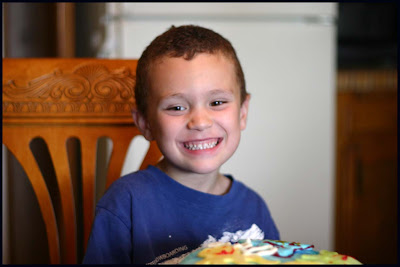 Will came back for the last part of it. He liked piping the dots on (not pictured- the dots came last!) He was so happy with the cake. Although, in true Will fashion, he said it would've been cooler if it had been a city "this tall!" (Think four feet in height.) 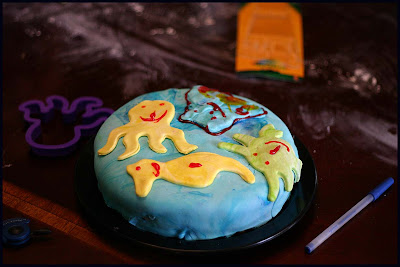 Thanks Cori and family for having us over and sharing a talent! It made our day go by faster, and my kids had a great time. They now (especially Ed, who is fascinated with driving directions) also point out the general direction of your house and ask if you are home when we drive by.
Posted by Karrie at 9:08 AM