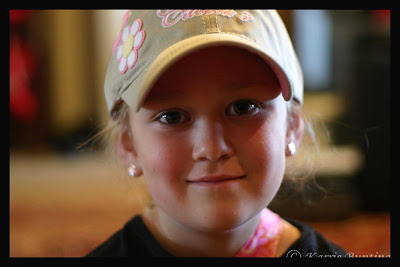 Kacy got a huge art kit from Santa- I don't know what he was thinking. She loved it. She got a cool bag, some Polly Pocket dolls, a Hannah Montana Microphone (which I found out is actually really cool because our trailer has built in surround sound radio/CD, and it tunes to FM radio and is broadcast throughout the WHOLE trailer! "This is a public service announcement. Please pick up your Lifesaver wrappers. Now. Or Else. Thank-you."), and she got some books and PJ's. Love the books everyone! 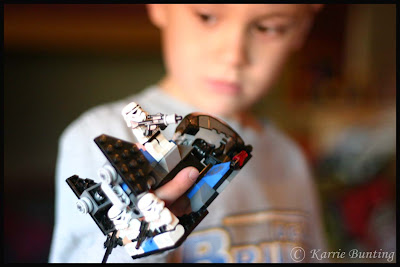 Santa brought Will a Star Wars Lego set. (They are expensive little suckers!) He was thrilled! His Aunt Kendra also got him another little set- score for Will. He spent most of the time trying to get people to help him put them together. He and Ryan did this one before we left for the big city. He, too, received jammies, books, and his new favorite item: a Cabelas hat. He hasn't taken it off since he got it. He sleeps with it by his pillow. He wants to be like his Dad so much! He was super happy with everything he got. 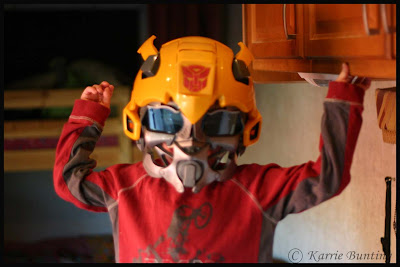 Santa brought Ed a Bumblebee helmet. He was the second one up (Kacy was the first), and he kept saying, "Santa brought me a Bumblebee mask!" over and over and over. It was so funny. It makes the cool noises. He loves it. He got jammies and books, and his favorite books were from Aunt Kendra: two little I Spy books. He LOVES I Spy books. (Visual discrimination practice is great for pre-reading skills!) 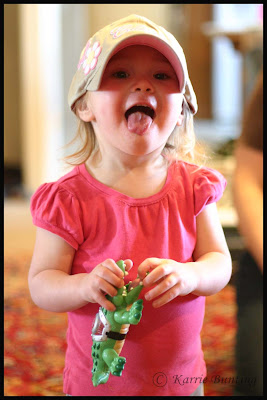 Santa brought Jessie a plush Elmo doll. I guess he decided that even though I personally hate stuffed animals and things, a smallish Elmo doll was okay for this little girl who loves Elmo. He thought about an Elmo phone, but they make noise, and the Bumblebee helmet already made enough noise. She, too, loved her hat, as well as the two babies she got, the jammies, and the books.

I was so excited to see the book selection and jammies. We are big book people in our house, and my kids were due for some decent pajamas. Except Kacy, who now has five pair. But everyone else was in desperate need. I was excited to see a lack of big, plastic, noisy toys, and my kids were just so excited with everything they received. My parents got my kids a swing set (Hallelujah!) that we are going to set up behind the house. It should give them something to do while we work on the house, and help keep them busy and safe. I'm excited at the prospect of it. When kids don't have kid stuff to play with, they end up playing with tools and sharp, pointy, dangerous objects. My siblings and I would play for HOURS on our swing set, climbing all over it, hanging upside down, using as a ship on the ocean, or on a sea of hot lava. Hours.

Ryan got a hand held ham radio, a cool ladder, a motorcycle cover, and some cool books that he loves- a book on butchering and a Charles Russell short stories. Together we got a restaurant gift certificate (a date!), a Target gift card, and a very nice clock that will go perfectly in our house.

Santa brought me a diet Pepsi, some dark chocolate, and some sexy underwear.

Sexy underwear in Santa's world are thermals from the Military Surplus store.

He knew EXACTLY what I needed. I wore them today under my jeans and they worked wonders! I love them.

I also got some great cookbooks that I had my eye on, some cash (yes!), and jammies (they are warm. It's all about keeping me warm. That's a good thing.)

We had a prime rib dinner, with Karl's prime rib, Cherie's carrots, and Jocelyn's Christmas Cheer being my favorites. (Christmas Cheer is what I call the goodness that is a pretzel crust, cream cheese/whipped cream middle, and a berry/jello-y top. Twice in one week- I'm hoping for leftovers tomorrow, but I doubt it! Such a treat!) At my parent's house I ate my weight in sugar. It was not pretty. But it was tasty! We had a short visit with my Grandma Sorensen and Aunt Carol and Uncle Chuck. We don't see them very often- it was good to see them. Maryellen, Brandon, and Baby Abby were visiting, too.

More pics of the extended family next time.
Posted by Karrie at 10:06 PM