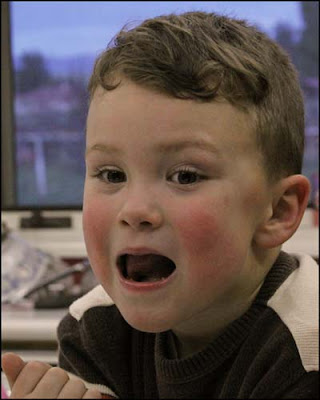 Ed is going through a dinosaur phase right now. His favorite show is "Dinosaur Train" on PBS. (Of course! Dinosaurs AND trains? Who was THAT genius??? Actually, I think it's the Hensons. I'll check on that.) He calls himself "Ed-ma-saurus Rex." The rest of the family has a name, too. Mine is Mom-a-saurus, Ryan is Dad-ma-saurus, and on and on for the kids. He says he is NOT an herbivore, and NOT an omnivore, but only a carnivore because he likes to eat meat and fish. (In real life, Ed is my one of my kids who will eat peas, carrots, and broccoli...) He does a lot of stomping around.