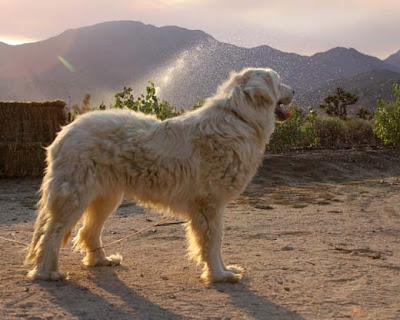 We have a Great Pyrenees. He will be three years old this coming November. Right now he's looking like he has the mange, but he doesn't. He's just shedding his huge winter coat. Still. And he spends all day laying in the dirt.
I borrowed a "Furminator" from my friend, Amy. It works great for combing out the undercoat of an animal. The only trouble with George is that he is so big, the comb needs to be at least six inches wide, as opposed to the two inches it is. I combed him out a little yesterday. I have to collect the hair that comes out because once I just let it fly with the breeze, and when Ryan came home he said it looked like a lawn mower ran over a rabbit in our yard. 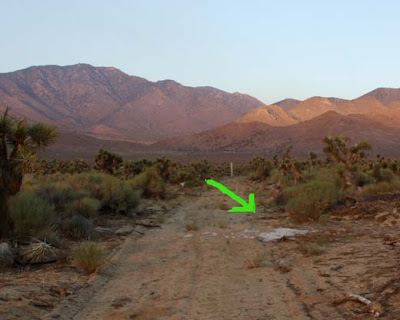 I got lazy and took George over to part of my running track. I was hoping the breeze would carry the fur away from our house area. Guess what? The wind shifted the other direction today.
What I really need are some sheep sheerers. That would do the trick.
(If you are asking yourself, "Why doesn't she just take him somewhere and get him groomed?" the answer is this: My Mazda has a black interior. George is light colored and hairy. The last time he was in my car, it took my a month to get all the hair out. Plus, it's like a dollar a pound to get your dog trimmed. I am not paying $130-150 for that. I'm too cheap. AND, Mazda 5 + big ol' George = dog in your face licking you while trying to drive. He's worse than kids because he doesn't wear a seatbelt.)
Here is what I know about Great Pyrenees based on my experience with George and a small amount of research I've done about the breed:
*Good with kids. My kids don't really like George. But really, if a dog the size of a Clydesdale came running up to you and knocked you over and licked you with a huge slobbery tongue, you probably wouldn't like it either. If my kids weren't so small, I think they would like him more. He scares them a little.
*Very stubborn. So stubborn, in fact, that while attempting to teach him to "sit," I finally had to break out little bits of hot dog to bribe him with. Before the hot dog: nothing. Hot dog bites as a reward: perfect performance every time. After only two minutes. He should have a sign hanging from his neck that reads, "Will work for food."  He has had fairly good manners since the small amount of training. He will sit, mostly stay, and come. Unless there is something else he would rather do...
This is because Great Pyrenees are bred to be independent thinkers. They are thrown out there with the sheep to guard with very little human direction. It shows. George came from a Basque sheepherding family, and his parents worked in the fields with the sheep.
*Likes to bark at night. George is no exception. A bark activated shock collar does no good because he only barks once. Then he waits a minute... then "woof"....pause...  Moving his kennel to the other side of a building where I couldn't here him anymore worked. Oh, he still barks, but now I can't hear him.
*Likes to lick strangers. I'm not sure he would ever hurt a person. I'm fairly certain he would eat the face off a coyote or other predatory critter. But people? Forget about it. (One reason George's adoptive brother or sister will be a Queensland Healer.)
*A bit lazy. As a puppy (first two years), he liked to run with me. We were up to four miles there for awhile, and he was able to run the whole time. Then we got him fixed AND he turned two... and now he'll walk for a mile. With some coaxing. He mostly likes to hang out in a "basement" he dug for himself under our storage container. He's good on a leash.
*Loves the snow. Unfortunately, it only snows here a handful of days during the winter.
*Loves to wander. I've heard of a Pyrenees in my area being found 15 miles from home. That doesn't surprise me, as George went through this phase of digging out and going to the neighbors. The neighbors are a mile away. I recommend good fences, or kenneling when you can't keep an eye on them.
I can't say I'd encourage anyone in the city to have a Great Pyrenees as a pet because of the night barking; however my Aunt Gaye has had three, and she manages just fine. I've also had a friend who brought her GP into the house at night so she wouldn't bark. I love the fact that George is exiting the puppy phase and entering the "big old lazy dog" phase. (It probably did not help that we got him as a two month old puppy when I was 8 months pregnant with my fourth child. No pregnant lady should EVER have to take care of a puppy. EVER.)
I would recommend a Great Pyrenees to anyone who wanted a dog that was good with kids, had critter problems (bobcats, mountain lions, coyotes, bears... George did chase a California brown bear off our property and into the hills), or who wanted a good companion that wasn't overly active.
Posted by Karrie at 9:47 PM

Email ThisBlogThis!Share to TwitterShare to FacebookShare to Pinterest
Labels: critters