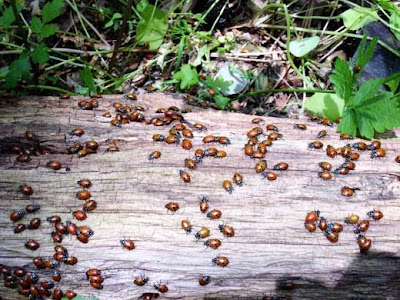 Monday the kids and I headed out with a great group of moms and kids for a ladybug hike. For some reason (the name of it? "Ladybug" seems like a name for a preschool class or something) I thought the hike would be easy. It wasn't. It was great! But a little challenging for my girls. Turns out Kacy doesn't really like perceived danger, and the creek, stinging nettle, and slick rock unnerved her. I think the cliff did her in though. There was one point that we crossed that I thought, "I can't believe my boys did this without me! What if they had fallen? They would DIE!!!!" and then it was over twenty feet later and my boys were fine. My boys are like mountain goats. Will was hiking with the big kids out in front, and Ed was not far behind. I am grateful for moms and bigger kids who watched out for them. I have to say that I was so impressed with the group of kids we went with. We didn't know most of them, and they all watched out for my boys. Kacy, Emily S, Marcie and Jayda, and Jessie and I were in the back. Another mom friend of that Marcie knew hung back with us and helped us out a ton. It's really very difficult to cross a creek on rocks and logs with a two year old. And, although the hike was tougher than I thought (does not help that I am out of shape!), it was so fun to see the kids with thousands of ladybugs. I took my point and shoot, and in true mom with hands full fashion, I only took a handful of pictures. 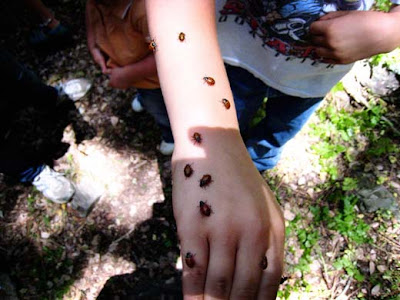 This is Will's hand. I think this is all he dared. Zack B. had them all over his hair, his shirt, and his arms. If is wasn't ladybugs, it would have been creepy. 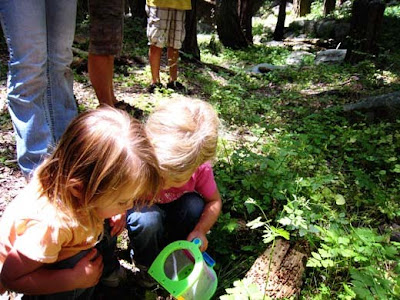 These two girls are three and a half months apart. They did a great job hiking for being only two years old. I hope they are friends when they get older. 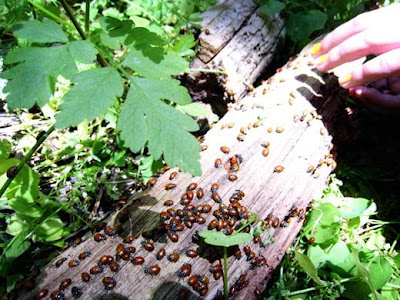 My pictures do not do the ladybug population justice. It was AMAZING how many there were. 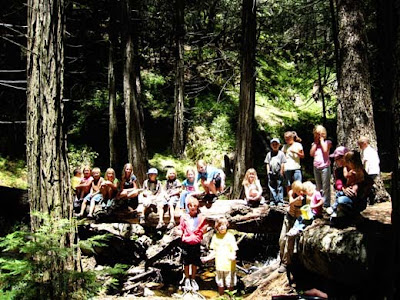 There was a mess of kids there. I can't begin to remember their names. All I know is that they were cool.
Ed discovered what stinging nettle is. It welted across his wrist and thumb. When I caught up to him, someone (Michelle, maybe?) had put mud from the creek on it to try and soothe it. It hurt! After a few minutes, he was still rubbing it on his shirt and saying "Ow. Ow. It hurts." to himself. Then, either out of embarrassment or irritation, started saying, "I'm fine! I'm fine. Let's go already." while still rubbing his wrist.
After the hike, we walked across the hwy to the lower part of the campground and checked out an old cabin. It has been freshly vandelized and was nasty. It would have been VERY cool with out the graffiti and nastiness there. There was a rope swing that entertained the kids for awhile. Ed fell and sliced/scraped his hand pretty good, so we hiked back to the picnic area where Jessie played nurse. She held band aid and cream while I cleaned him up, and then put the bandages on him.
***To get to Cedar Creek Campground, find Hwy 155 from where ever your starting point is. From Hwy 178, go to Wofford Heights and turn on Evans Rd/Hwy155. It's up over the hill. You can find Hwy 155 from Freeway 99 in the Central Valley, too. But, you'll go through some winding roads that make me want to hurl. Beautiful drive, nonetheless. Bring a barfbag is all. There are Forest Service signs, a creek (flowing nicely right now, who knows about later in the year though), and outhouses that were fairly clean. Easy access car camping. Ryan said it's fairly crowded during summer weekends. Ladybugs seasonal- plan on the middle to late June, depending on weather.
***On of those pictures (I can't remember which one!) is available for download. Look on the left sidebar for "Image Downloads" link.***
Posted by Karrie at 11:06 AM