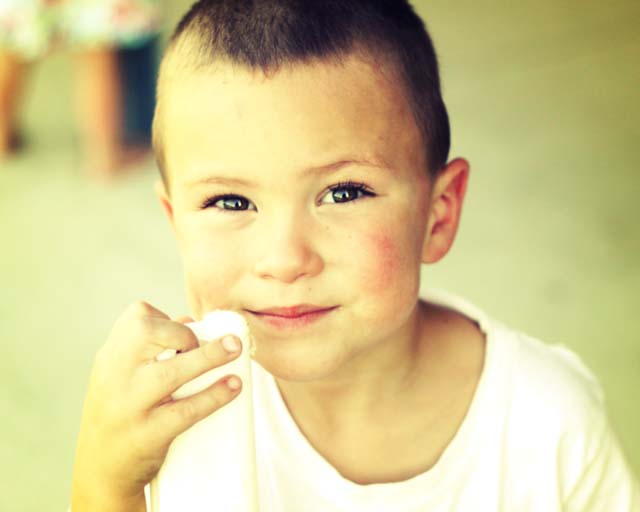 Some "fun" things about Ed.
*He told me in the car last week that he NEVER wants to be an "old man." I asked him why, and he replied, "Because old mens are cwazy!"
*He LOVES to jump off the side of my mom's spa and into the pool. He got his start at the Kent's house by sliding down the slide, and then venturing onto the diving board.
*He is our middle child. Technically he's in a tie with Will, but because Will and Kacy are so close in age and such good friends, Ed is often left out. This results in tears, and to get the kids' attention he'll annoy them. I keep trying to tell him that throwing cars at them, or messing up their stuff won't help the situation. He'll get it eventually, I hope.
*He is so active and curious and has a hard time sitting still and listening. Primary is often a challenge. He's a "Sunbeam," the youngest group in there, and he's with two girls who are, well, GIRLS. They like to sit and listen to stories and color. Ed is a stereotypical Bunting boy, and has to move around lot. Doesn't make for a good mix. Again, he's gotten so much better than he was in January, but he has a way to go.
*He's counting down until he turns five and can go to school. We've gone from a full nine month until his birthday to eight and a half... whenever he asks and I tell him, I get an "Oh, dangit! It's taking so SLOW!!!" He's got it planned out already. He wants to invite everyone from church. Race car cupcakes. Little cans of soda. Presents. Meat.
*His favorite color is orange, and favorite show is "The Upside Down Show." He likes country music and riding in dad's 4x4.
*He no longer wanders off, and can be trusted to play outside by himself! Mostly. Ah, that's SWEET!!
Posted by Karrie at 3:28 PM

Email ThisBlogThis!Share to TwitterShare to FacebookShare to Pinterest
Labels: Ed