Desgin Boards (and my Friday picture)

... Friday Photo Fun... well, I haven't really been taking pictures lately. And I probably won't for awhile, but only because of the house.

Speaking of, here is a thing we did this week, besides all the photographically boring details like install the pressure release valves and drains on the water heaters... that's SO INTERESTING... not. Things like that are boring. But, this? This makes it seem like the house is actually going to be finished, and it nails down some of the design aspects that were still floating in our heads. 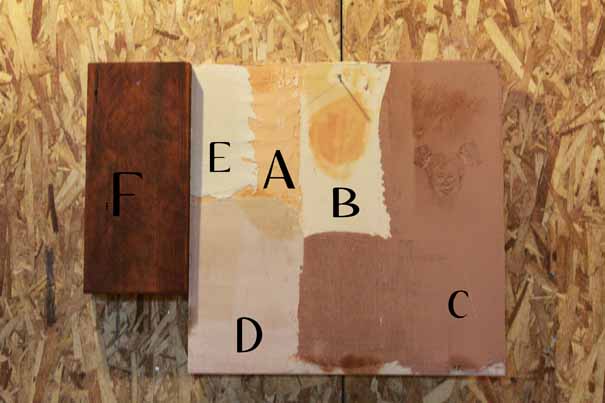 We came up with the idea of tinting drywall compound and plastering the drywall with that instead of painting. Turns out it's not an original idea, but hey. Ryan bought some liquid cement dye in the same color as we used on the front step. That's what you see in A. Too orange. For B, we used three drops of green food coloring (no joke, you can use that stuff) and a lot less "Buff" color, with a better result. But not perfect. We also picked up some cement color in Brown, and that's what C is. It looked exactly like chocolate pudding at first. D is less Brown, but it's too pink for our taste. Ryan was adding various amounts of sand to the compound all through this, and the texture of D was perfect. Lots of sand. E had lots and lots of sand (a 1:1 ratio, if not slightly more) and the color was almost just right. The stained wood (F) is what our window trim and baseboards is going to be. It's on the outside of our house, and will be put on most of the wood in our house. It's Cabot's Austrailian Timber Oil in Jarra Brown. (I think Jarra... not so sure now.) 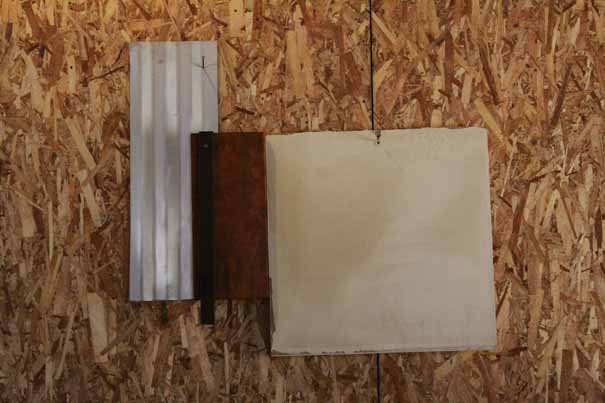 The finished product: Where the wall has dried (it's a little lighter in color) will be our wall treatment. Has some texture and dries rock hard with all that sand in there. It'll be hand troweled by US and will have an imperfect, old fashioned look to it. Same wood stain, with a skinnier piece in a paint color called "Pavement", which will be some trim and the doors. The tin will be on the ceiling in the kitchen/dining/loft and around the back of the bar/island.

Ryan is shooting for Wednesday to have the inspector come out for the BIG INSPECTION. Wish us luck!
Posted by Karrie at 2:17 PM

Email ThisBlogThis!Share to TwitterShare to FacebookShare to Pinterest
Labels: house