We had a great Easter Sunday. Ryan spoke in church today, and I would like to say it was a great talk, but I can't, because I honestly didn't hear much of it. Stinkin' kids and their humming and talking and all. I'm sure it was good- he always gives a good talk. Any way, after church, the kids and I (because Ryan had to work) headed on down to Bako and to the in-laws! Cherie made up a treasure hunt for the kids, and then after that, an they hunted eggs in the front yard. They had a great time, and there was no shortage of sugar. Dinner was really yummy: ham and funeral potatoes. Love those potatoes! Peas, rolls, and of course, jello.

Jocelyn made the kids some stuff to wear: the girls got dresses and the boys got to pick either a tie or bow tie. She's a whiz with the sewing stuff! Can't wait to join her in the sewing ranks (after I re-teach myself. It's been ages.) 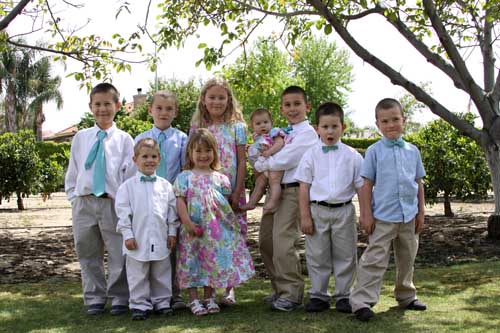 Don't be shocked: I really just did post a picture on my blog. It's been awhile, and I nearly forgot how. These kids are hilarious. 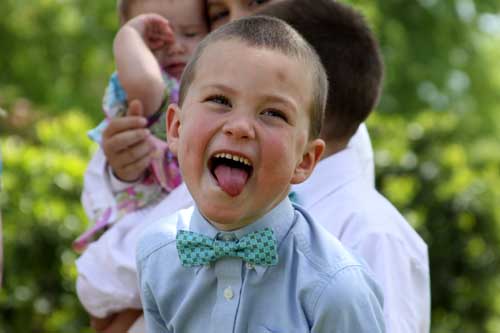 What's up with being 5 years old? (Ed is almost...) Seriously- check out Jared, too. 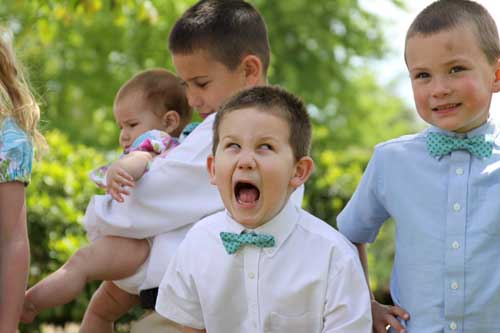 It's tough to get kids to stand still for one minute and look and smile all at the same time. But as frustrating as it can be ("Please just ONE decent picture for grandma!") it is equal parts hilarious. 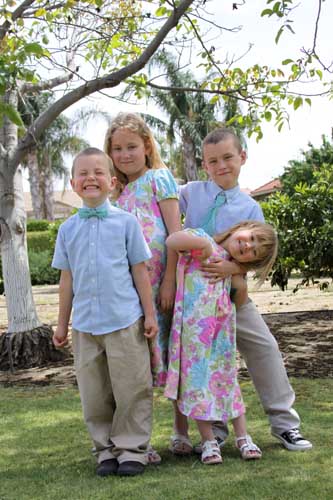 Today in church, Ed asked me to marry him. As in, "Mom, will you marry me? Cuz I love you." I tried to tell him why I couldn't, and he just kept begging.

Jessie asked me to cut her hair because she hates ponytails. I hate her hair all messy and in her face. She may get what she wants on this one.

Kacy brought approximately a dozen books to church today in her bag. They were Bible story books, and they weighed a ton! I'm glad she loves to read, but she honestly didn't take a single book out the entire time. They were "just in case." In case of what, you might ask? "In case I want to read." Duh, right?

I love my kids. Even when I was wondering just how bad it was that I considered bringing duct tape and rope to church, to tie them to a seat and keep them quiet. Not really! Sort of. I would never do it, but man, that sure seemed like a nice option today. That's just part of growing up I guess, for both the kids and the parents.
Posted by Karrie at 10:09 PM 3 comments:

I can hear the crickets chirping...

Ah yes, my sad little blog. My apologies to my grandmas! I still love you and yes, I'm still alive. Same to all my friends who happen to still check this thing. I have pictures, though! Lots of pictures of: drywall! And lately we have been tiling. We got the kids' shower tiled in Idaho Quartz, and tonight after I put the kids to bed, I'm going to grout the saltillo tile on the bathroom floor. We decided that between the two of us, if Ryan and I were ONE person, we would be the best tiler EVER. What that means is that we each have our strengths and weaknesses, and by working together we get the job done decently.

We have gone four weeks without hot water.

I gave a talk in church about developing a friendship with Jesus Christ.

I went to Time Out for Women and had a great time. Marcie took me to her favorite jeans store, and lo and behold, I have a pair of jeans that fit! They are long enough! They are dark washed! And THEY FIT. I spent the previous two days before said shopping trip hating my clothes. To the point of almost being depressed. Silly, but true.

I broke a tooth yesterday while eating a turkey sandwich. It was soft and yummy, and it's so weird that my tooth broke! Good thing we have had a dentist appointment set for tomorrow, and extra good thing it doesn't hurt.


Ryan and I  celebrated our 11th wedding anniversary. I went out of town with my friends while he stayed home with the kids. It was his gift to me. I didn't give him anything. (Although, I did come home feeling much refreshed and happy.) I'm paying him back now with my labor of love on the house.

Because now have a full time job, I am falling behind in everything. You name it, I'm behind in it. That's not a complaint, just stating the facts.

That's my new favorite saying, "That's not a complaint, just a statement of facts." Somethings can be construed as complaints, like the phrase "I'm so busy," but it depends on the tone of voice and mental state of the person who utters the phrase. Me falling behind? Doesn't really bother me. My kids are still fed, their clothes are mostly clean, and they are all still here and among the living.

The boys convinced Jessie to climb under the house, where they left her. As they were climbing out, they reminded her of the snakes that live under the house, and then they ran away. When I went to go find her, Ed told me she was stuck under the house. I found her in "the pit" crying about the snakes, and her asking me to get her out. Poor thing. (Bad big brothers!)

Right now it's Easter Vacation, and we are loving it. No getting up early (we get up at 7! It's like sleeping in!) and we can go and do as we please when we please to do it.

We would like to thank our moms especially for the use of the tubs and showers. Because of you, we don't stink (much).

I ordered a bath tub and some bathroom sinks today.

It took six tries, but we finally got the right shade of "lightest tan" for our walls.

From my Facebook: Jessie in the back seat of the car, staring at Ryan: "Dad is smart."
Me: "Why do you say that?"
Jessie: "Cuz he have a big brain. His head is huge!"

It snowed on April 8.

I can't remember anything else right now. I can't let a whole month go by without writing something, especially when I see how much the kids enjoy reading the blog books and looking at pictures of themselves when they were "little." Makes it all worth it!
Posted by Karrie at 8:01 PM 4 comments: