Jessie Had Tubes Put in Her Ears 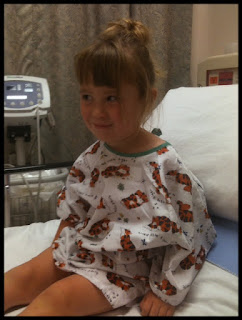 Thursday morning, Jessie and I left the house at 5am and headed to Bako so she could have tubes put in both ears. She has had chronic ear infections, and when I took her to the ENT, she had 30% hearing loss in the eight ear, and 10% in the left. Dr said it was temporary.

We got to the hospital at 6:30, and she was in surgery at 7:00. She was finished by 7:20, and we were in the car at 8:00, with Jessie asking for breakfast. Dr said her ear drums were "thickened," which I need to look up. Looks like Jessie will be an ear patient for awhile.

We came home and I grouted the master shower. I'll be glad when this house is finished!

Posted by Karrie at 7:23 PM No comments:

How Many Ways Can You Lose an Ed? 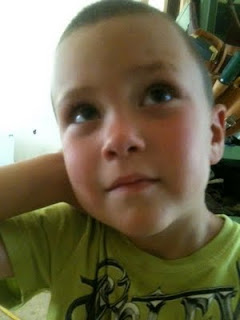 On July 20, we lost Ed. Again. That's right, Ryan called search and rescue, the fuzz was dispatched, and an entire search party of church friends showed up ready to go.
So, what happened was Oscar came over to help Ryan on the house. About the same time he left, I told the kids to go get their shoes on because we needed to go to Home Depot. (Their favorite!) After about 20-30 minutes I realize I haven't seen Ed. I go to the trailer to see if was having a hard time finding his shoes, and I don't see him. So we start the whole routine of yelling for him while walking around our cleared property. After another 15 minutes or so, we wonder if maybe he climbed in the back of Oscar's truck just before he drove off. He's not wearing shoes at this point, but that doesn't really matter because Ed says he's native and doesn't need shoes.
Ryan climbs on the roof, I'm looking in all the cars... And then I drive ten miles to the only stop sign between here and Bako thinking IF he got in Oscar's truck, maybe he jumped out when he stopped? By then an hour and a half had gone by and I told Ryan it was time to start thinking about calling someone. So, in the 13 minutes it takes me to drive home, Ryan called dispatch and had people start to come, and our bishop called and Ryan told him what was going on. He called People...who called people...because it's Ed!
So, to back up slightly, Ryan told me to let George out. George, our goofy Great Pyranees. George ran around a little, followed Ryan a bit, and sat down under our trailer. Ryan went into the trailer, went to the end where George was, and viola- Ed was under the bunk bed, fast asleep, behind the kids clothes boxes.
Ryan called off the government search party, but our friends were out of cell reception by that time. They all showed up, and the consensus was, " It's Ed. He could be up a mountain by now!"
Aye-aye-aye.

We made him go to Home Depot the next day! :)