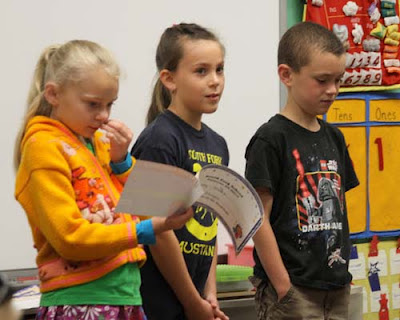 Will got an award today at the K-2 monthly awards assembly. I was hoping this award was more legit than last year's...you know if there is less than 20 kids in your grade, your teacher will give you an award over the course of nine months sometime...and it's like "most organized pencil box" or "best smile in the morning." Last year, I can't remember the title of his exactly, but it was May, and the thing she came up with was all about how Will is a day dreamer and designs machines in the margins of his tests (and all over his desk), and how he reminds her of her son, who is an aeronautical engineer slated for NASA Astronaut program or something. For reals, her son is. I agree that Will definitely has those tendencies, but I'm not about awards just for the sake of a pat on the back.

Anyhow, this year, Mr. D. highlighted his top three readers in the class, all focused on Accelerated Reader. Will, in the last quarter, went from having 2 points to 10 in a matter of four weeks. All because I promised him ice cream when he reached a certain point. The boy just needs a little incentive. And, he's a little picky about what he reads- he likes informational stuff, like how robots work or how ships are built. Not stories so much. Not sure AR tests on expository material.

Ed officially started AR testing, too. He took a test today, passed it, and reported it was "Easy-peasy, lemon squeezy." he is the first Kindergartener to do AR, as they usually wait until the end of first grade. Kacy said she has blown Aidan out of the water with points. They used to be tied, until Kacy started reading the Harry Potter books, which are worth A LOT of AR points.

Go reading kids. May your love of reading continue always, leading to an increase in vocabulary, fabulous spelling skills, and awesome writing skills!

Here are the comments from their progress reports:

Kacy: Kacy is always on task. Kacy struggles determining which hand on the clock is for minutes, and which hand is for the hour. (But she has straight A+'s, so it must not effect her much.)

Will: Will continues to make good progress in math and reading. He has done a great job on AR this quarter- 8.3 points.

Ed: Ed is an amazing reader. I know he is bored with what we are doing in class because he is such a good reader and good at math as well. However, where others are accepting the challenge to show their strengths in the academic areas, Ed is happy to just quietly sit and do what is expected of him, and not much more. I would like to see him challenge himself a little more and be willing to make some mistakes in order to grow. He doesn't like making mistakes.

In other kid news, we had the most interesting conversation about what the kids are going to name their kids. (Seriously, it seems like every Sunday they contemplate about who they are going to marry, where they are going to build their house, what car they want to drive...and now my grandkids!) Kacy likes the name Jewle for a girl, and she said she will name her boy Virgil Danger like Ryan wanted to name Jessie if she was a boy. She also wants to name one David, since there is a "David thing" in our family. Will thinks Steven is a cool name (like Uncle Steven). I suggested they name one after their grandma Karrie. They all said they would, then decided it's whoever has a girl first since there can't be that many Karries.

Will wants to build a house somewhere out by us. Like, it's not an option to buy one, he's definitely building.

*****************
House update: pictures soon of the finished... I repeat, finished KITCHEN! The floor needs finishing... but I MIGHT get to use the dishwasher this week. Dang skippy I'm loading up my dirty dishes, walking them 100 yards to the house, and using that dishwasher. I'm already tempted to go use the sink because it has hot water!