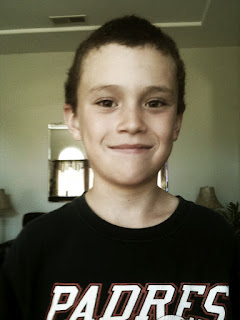 Eight years ago, I gave birth to this guy! He is the only kid of mine not born on a Sunday. He doesn't gag on vegetables much anymore. His favorite colors are red, orange, black, and blue. His favorite food is ice-cream. He LOVES Legos. He is happiest when he is designing something complicated. He likes to tell you about his designs, down to the finest details. His favorite subject in school is science. When he grows up he wants to be firefighter, maybe a forest fire fighter because they have good days off. He is stubborn as a mule. He loves the outdoors and camping. He is a great hiker...much like a mountain goat. He is unafraid of heights, but not so brave in the water (but getting better). We love Our Jasper William!
Posted by Karrie at 2:51 PM No comments:

Did I mention I am nervous to take Will to a psychologist? I am, just a little. What if I take him, and during the course of our visit, she tells me, "He's fine. But why don't we schedule a follow-up appointment for you?" :)
Posted by Karrie at 1:51 PM 1 comment:

I am taking a break from what I was doing...and now I'm doing this.

So, here is what I know:

* I called a child psychologist. She hasn't called me back yet. (It's only been an hour.) Will is almost 8. I probably should have taken him ages and ages ago, but with my Child Development/Psychology background, I have tried my best to help him at home with his quirkiness. I could write a whole book on the boy, and he might be a chapter in my book someday. Basically, I have suspected Will to be on the autism spectrum since he was about a year old. Knowing there is no real "cure" for his behaviors, I have done what I can at home to make him more "normal." Home speech/communication help, home socialization (so painful!), got his hearing and speech tested, home emotional control help... all things to help him at home. He has outgrown several behaviors, and he is improving. Or is he? Some of his toodlerhood quirks are turning into childhood quirks...any way, it's time to get him checked out because I admit I have hit a road block.  So, off to see someone who can help me help him. Crossing fingers.

*I quit 4-H. I was putting way more into it than I got out of it...for three years. When the kids can actually show animals, we will go back. (They actually could right now, except we aren't ready, property-wise).

*House is almost done, of course. Hasn't it almost been done for a year or more now?

*Jessie is so bored at home with me. We might drive each other nuts. She wants to be in school so bad. Right now she is taking pictures with my iPhone on her own camera app that makes things all funky.

*Was looking up some county recording stuff about my property and some local history. Weird stuff.

*Thinking about making puppies. Pearl would be the mom, of course. Need to find a small blue ACD who is smart to breed her with. That's going to be harder. Wonder if we found a red one, what would that look like? I think if you mix colors some are red and some are blue, but no 'tweeners.

*I need to go to the store for some more hair gel. Is that strange? Ryan and I cannot go out in public without hair gel. And my favorite kind, after years and years of trying different products? LA Looks, the blue kind. I know, right? With all the fancy stuff out there, that cheap blue crap works the best in my hair.

*Have an update on Ryan: The po-po have more info on his shooting. So here is what I've heard: A guy was arrested that knew about the shooting. He wasn't involved, exactly. He knew it was going to go down and was listening to a police scanner in Lamont that night. So, apparently there was this guy. Let's give him a name, like Bob. So Bob (who might be the guy who they eventually arrested...have no clue, and don't really care about this detail) was in our valley looking to kill another guy. Let's call that guy Doug. Because it rhymes with drug. Doug is a local drug dealer who stiffed his suppliers some money. So Bob was up here for several weeks looking for Doug, so he could kill him. The suppliers, who are mad at Doug and hired Bob, need a name. I can't call them what I call them in my head, because that would tarnish my goodie-two shoes image and we can't have that happen, can we? Let's call them Stooges. Like, the Three Stooges. Because they are stupid and I don't understand them. Any way, Stooges come up to help Bob out, because Bob was not getting the job done. So, they come up, can't find Doug either, and decide to smoke a cop to send Doug and their other dealers a message. So, they can't find a cop either (Hello, rural valley at night!), start to drive back to Bakersfield, and lo and behold, they see a CHP officer on the side of the road on the way out of town. That's when Ryan's story starts. You already know that part. Arrested guy (again, could be Bob, I can't remember) is a parolee at large and is back in prison. He gave up the street names and cell phone numbers of the Stooges.
One month later, a guy is arrested in connected with a marijuana grow. We will name him Vanilla. He, too, knows about the shooting. What he knows is the street names of the Stooges. He also knows that Ryan killed the shooter, and also hit a FOURTH person in the car (who is alive). Vanilla has since been deported by ICE. (Get it? Vanilla Ice?)
Supposedly, all people involved are not in the area any longer.
Lesson: DO NOT ever get in a shoot out with Ryan. Just don't. He will shoot you dead. A talent I am extremely pleased with, because I get to eat dinner with him tonight and he can still help me raise our kids because of it. Also, in an end of the world situation, I will be fat with meat...and have awesome leather shoes...but I digress.

Because of this new info, I am mighty tempted to make my blog public again. This is something I don't know though. Not sure yet.
Posted by Karrie at 10:51 AM 3 comments: 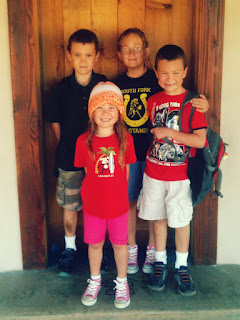 Yesterday was the first day of school for the older three, and the last year I'm home with a kid! Kacy is in fourth, Will in 3rd, and Ed is in first. Kacy loved everything about the first day except the review of the rules, because she has them all memorized. Will liked the first day, too. He was enthusiastic about it, and was excited to be there. Ed was quietly humming and looking out his window on the way home. Ryan said, "You are being quiet, Ed. How was your first day?" Ed replied, "It's pretty obvious, isn't it?" He just smiled and kept on smiling. I'm going to say he liked it. 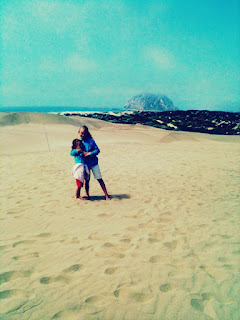 On Friday the 10th the girls, our sitter Emily, and I went on a day trip to Cayocus and Morro Bay. The boys were camping. It was HOT. So, we left!

We started in Cayucos, which was more crowded than usual. Then we hit Morro Bay, where we rented a canoe and paddled our way across the bay. That was a little scary on the way, because a canoe tips over easier than a sit on top kayak. We did great though, and Kacy did not have a nervous breakdown. Almost, but not quite. Kacy is a very cautious girl. A wobbly canoe in the bay with seals and a map that said "Shark Inlet" did not help her feel better. She was in front of Jessie and would ask her, "Are you holding still? I can't see you. You need to hold still." She also had a death grip on the sides of the canoe. When we got to the sand dunes she jumped out and outstretched her arms while yelling, "Land! Sweet land!" She was more relaxed on the way back, after her confidence in us grew. Jessie just hung out, looking around. I will admit I was nervous a bit, with our PDF's on we wouldn't drown, but holy moley...that water was murky and it would've been a long swim to either side with two hysterical girls. Good thing we were FINE!

Later, we met up with my grandma, mom, Kristin, Caley, and Kendra and ate dinner at the Sea Shanty. Yummy!
Posted by Karrie at 3:09 PM 4 comments: 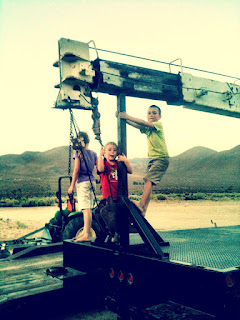 Don't you let your kids play on the crane truck? While they wait for their dad to come home so they can sleep in The Beast's camper?

Ryan just pulled in. "Do a donut!" they all yell. 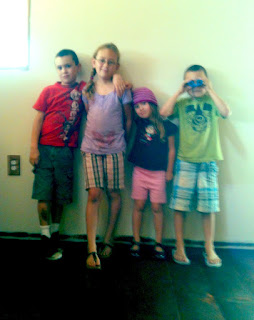 Summer is winding down. Girls Camp is over, which means we are on a "stay up late- wake up late" schedule. I haven't done ANY of the academic things I had planned on doing with the kids. I'm an awesome mom! Lol. The house is almost finished, and school is a mere 16 days away. The boys are going camping next week. Us girls will probably go get ice cream and paint our nails fancy. We might even have a Harry Potter marathon!

Do you love Jessie's ensemble? Beanie and church shoes and all? Ed's binoculars? Will's pose? Kacy- my fully normal child, who has recently taken an interest in what grown ups are saying. She is entering that phase...leaving childhood and ever so slowly becoming more adult like. That doesn't bother me. I love seeing progress in my kids. Can't wait until she drives- then I can make her go get ice cream for me! (Just kidding, Kacy. I'll make you go milk a goat an we will make our own ice cream.)
Posted by Karrie at 8:32 PM 1 comment: