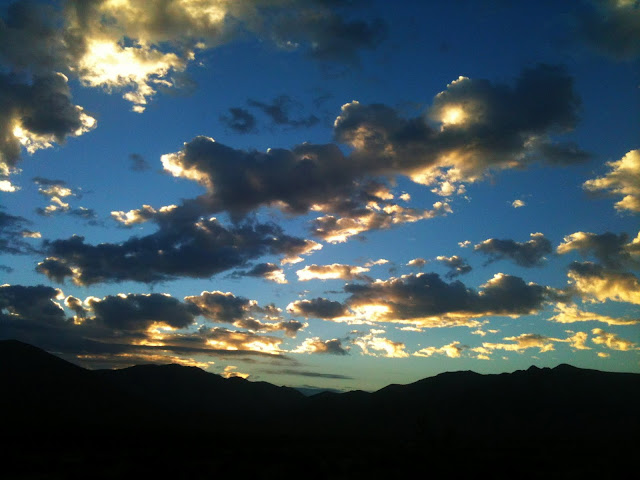 I believe this is a sunrise. Our view to the East. I see the sunrise almost everyday, especially now that it gets lighter later.

We have "The Muppets" from Netflix. Watching it for the third time in four days. Fun. Yesterday on the way down the canyon the kids started doing movie quotes and busting out in parts of songs. Aye.

Did I mention Ed has perfect pitch? The boy is musically inclined. Must start piano soon. I am asking my cousin, who is a vocal coach, what I should do with him at home to help him. The other kids like to sing, but he has the best voice. Will is super interested in playing the piano and the guitar. I'm glad!

So, today has not been the best day. Not horrible, but honestly, I'm feeling really bummed. I am moving all the crud in the house out so we can call for the final inspection. We spent most of the summer out there during daylight hours, and even started eating out there. I cooked in the trailer, but it was so nice to have kitchen counter tops and a sink and stuff. I was so excited to have closets for the kids clothes...and now I'm moving everything out. To top it off, back in June, Ryan "cleaned" the trailer, moved stuff out of the trailer and into the house. So now I'm moving it all out...I really, really, hate doing things twice. Oh well, I got the kids rooms done. Tomorrow will be my stuff. The only glimmer of hope I had was when I was cleaning up the kids' clothes. I picked out 5 shirts, 5 shorts, one thing to wear to church...and I was wondering if I needed to keep sweatshirts out. I asked Ryan, and he said, "It should only be two weeks, then we can move all this stuff back in." I am hanging my sanity on that statement, as we came into the trailer this afternoon with no A/C, it being 87 in here, and the A/C didn't work until 10 minutes ago. (It's 7pm). Hey- at least it's working this early in the evening! And dinner is a mess to clean up. NO COUNTER SPACE. On the plus side, the kids eat lunches in the cafeteria right now, so they can have a hot meal then, and sandwiches for dinner! (Ryan works afternoons this month.) That is totally rational, no?

Remember "Dirty Dancing?" I am thinking of the line "No one puts Baby in the corner." Except, I'm changing it to "No one puts Karrie in a trailer..."

Tonight for dinner I cooked shrimp seasoned with lemon-pepper, served it over a bed of noodles coated in sour cream for the kids, with a side of edemame.  Is that how you spell it? For me, because I'm on a diet until I regain my self control, I had a whole bunch of the same shrimp over a bed of steamed green beans with some sour cream and Parmesan cheese. The real kind, not the "sprinkle cheese." Just thought I'd share that.

Today is Labor Day, and in honor of it, I worked my butt off. Ha ha ha.The kids were home all day. They took turns "helping," trying on bright green soccer socks, pretending to be leprechauns, an air guitar band complete with clucking chickens, and building with the Lego's, of course. They also each had one Eggo waffle, three eggs, and a string cheese for breakfast. Except Jessie, who had two waffles and two eggs and cheese. I think Jessie is the most excited (besides me) to get a fridge, because she gets to have open faced mayonnaise sandwiches again. Gross. We don't have TV. Because the satellite broke and I don't want to buy another one. And we can't stream stuff online because of satellite internet restrictions. Today would have been a good day for TV. (But then I would have missed the ukulele playing leprechauns...)