Easy White Bread with a Twist

I came across a recipe for white bread that claimed it could be made in an hour. I was skeptical! So in an hour of insomniatic desperation, I tried it out before I pinned it. Later, I added my own twist for a quick dinner bread.

The twist: grade up a couple of cups of cheese (I threw in some cheddar and what was left of my shaved Parmesan), and add a ranch dip packet. The powder kind.

Mix all dry ingredients. Add oil and water. Mix 5 minutes in your mixer. Spray bread pans with Pam. Shape into two loaves, put in pans, cover and left rise for 25 minutes. Bake at 350 for 25 minutes.

I use a convection oven, so I cover mine with foil for the first 15 minutes and use a 325 oven. 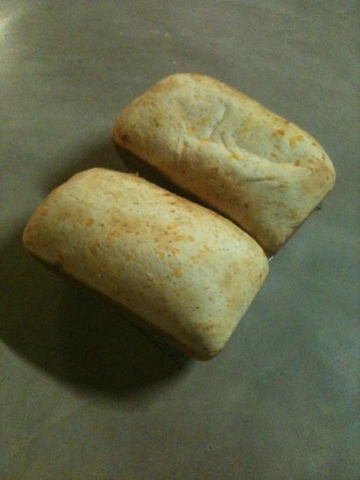 Posted by Karrie at 5:56 PM No comments:

My kids make me laugh and cry in equal amounts. This insane laughter and insane frustration cancels each other out, thereby creating sanity. I think.

Yesterday, we passed a man sitting on the curb by the gas station. Will, who happens to still be fascinated with hobos asks me, "Hey Mom, was that a hobo?" I replied that I was driving and didn't see him, so I didn't know. We then pull into that gas station for an emergency after school run for snacks, and before we get out of the car, Will states, "Grandma Sorensen is definitely NOT a hobo."

Growing up would have been so much more interesting if she had been, though. (But I'm grateful it wasn't.) Grandma Sorensen is like the anti-hobo. If there was such a person.

While sitting in Carl's Jr last night for dinner (shush yourself. I do feed my children nutritious meals 95% of the time. Yesterday was a 5%!), Ed looks over at a sign on the wall and starts to read it. I should mention first that Ryan kicked Ed and Will out of our booth and made them sit in the booth adjacent to us. They were both squirrely acting. Back to the sign. Ed starts reading it, and he's all, "Aqua...aquapant limit? What the heck is an aquapant limit? Mom! What are aquapants?" He was seriously confused, and I was cracking up. But that isn't that funny. The next thing is better.

The next thing: Still at Carl's Jr., and Will decides he needs to use the bathroom again. I tell Ryan to take him, and Ryan tells Ed to take him. Buddy system and all. I was 80% okay with this decision, because I had been somewhat monitoring the customers in the store, we were in a very nice town (not Bako!), where even the Walmart employees are all super helpful and nice (and clean), and they were using the buddy system. The 20% of my brain was in "mom mode" though, and a slightly paranoid mother, I am. Part of me dreads becoming a story on the news about how my children were abducted or molested because I wasn't watching them. I know. You don't have to say anything.
So, we were finishing up and the boys are in the bathroom together. After a few minutes, we hear Ed scream. Not in a scary way, exactly, but he was definitely screaming. We looked at each other for a few seconds, and there it was again. I go into "Someone is molesting my child!" mode and very rudely tell Ryan to hurry up and go check on them. (Sorry honey. I'm mental.) Of course he goes, and I'm confident his super manliness will beat the living daylights out of whoever is messing with my kids. He comes back two seconds later trying not to laugh. I ask what was going on, and he tells me that he opened the door, and the boys just looked at him like, "What?!?" Apparently the floor length urinal was just too much fun. They were all excited about peeing on the floor. The screams were screams of incredulous wonder at the urinal that allowed them to pee on the floor.

Cheaper than Disneyland, I tell ya.
Posted by Karrie at 4:17 PM 1 comment: 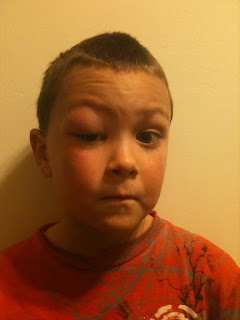 Wednesday morning Ed woke up with a swollen eye, as seen above. It was weird. It was funny, kind of. It was one of those things where he woke up, knew something was wrong, and decided to wake Will to verify. Can you imagine it? "Hey Will, is something wrong with my face?"  I can picture Will replying in one of two ways. "No." (True brotherly love.) Or, "Dude. You should go look in the mirror." He said something like the second one. Because Ed went to look in the mirror. Then the two brothers did the next logical thing. They woke up their older sister (who knows everything). Kacy did the only sensible thing. 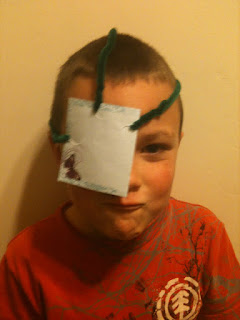 Kacy fashioned Ed an eye patch from her available materials: pipe cleaner and a piece of notebook paper. She offered to color over the butterfly for him. Then she said, "We should go show Mom."

Show me they did, BEFORE THE ALARM CLOCK WENT OFF. I gave them my usual, "Why?!? Five more minutes! You couldn't wait five more minutes?" All four of them were standing there by this time, and they just kind of shoved Ed in front of them and said, "Ed has a swollen eye!!!"

I get up, examine it, and determine I have NO IDEA why or how his eye is swollen. I quiz him about different possibilities. He has no idea either. I quickly snap a picture and post it on Facebook asking if anyone has any idea what this could be. The results: pink-eye or a spider bite. Both require medical attention. I do have eye drops on hand for pink eye, but if that's what it was, it was the worst case of pink eye I'd ever seen. Plus, his eyes weren't pink. Just sayin'.

I end up taking him to Urgent Care, but not before I drop Kacy's lunch off at school, where the school nurse happens to be in, and he overhears me telling the secretary about Ed's eye. He introduces himself and tells me not to let the doctor tell me it's a spider bite. He goes into detail about the rarity of a spider bite causing that much swelling, and the fact that poisonous spiders don't live here, except for black widows, and you know when you get by a black widow.

Urgent Care says, "Whoa!" and they give him Benedryl while we wait. (Yes, I though about doing that, too. But I didn't want to give him ANYTHING until he was seen first. I'm sometimes cautious that way.)

He starts to look better. 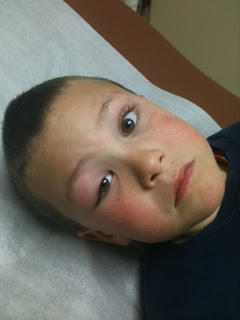 She examines him and says, "Some people think spiders and bugs cause this. That's actually really rare. He's got an infection. He needs some antibiotics, and keep up with Benedryl for the next couple of days. If the swelling returns or gets worse, take him to the ER, because the swelling can crush the optical nerve."

He got a shot in the butt.

And it made me look like a liar. Because last time he was in this particular Urgent Care, it was for stitches in his chin. Lots of shots.

And this last fall when I took him to Urgent Care for a cough that turned to pneumonia in a day, he got a shot in his butt and blood drawn. Three times.

This time, I said, "No, honey! They won't give you a shot in your butt! They will just look at your eye. Probably give you some eye drops or something."

He really had a little meltdown at the words. He just started bawling, crawled into my lap (he's huge), and begged me not to have to have a shot. We bargained, and he got to shop for a toy if he wasn't a spaz during the shot.

He spazzed only a little. Like, the alcohol wipe touched his bum and he was all, "Ow! Ow that hurts!"

Afterwords, Jessie asked about the shot and replied, "I'm tougher than you are. Shots don't bother me at all. I'm a shot-toughie." And, she is. But, she hasn't had a shot in the butt yet. 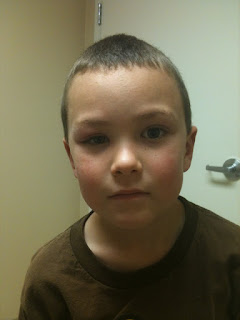 The next day at the re-check. Better! Much better. Supra orbital (meaning upper eyelid) cellulitis is a skin infection that can be caused by many things. He had a little scratch on the corner of his eye...that may be the place where the nasty bacteria got in. He looks totally normal three days later.
Posted by Karrie at 4:02 PM 4 comments: