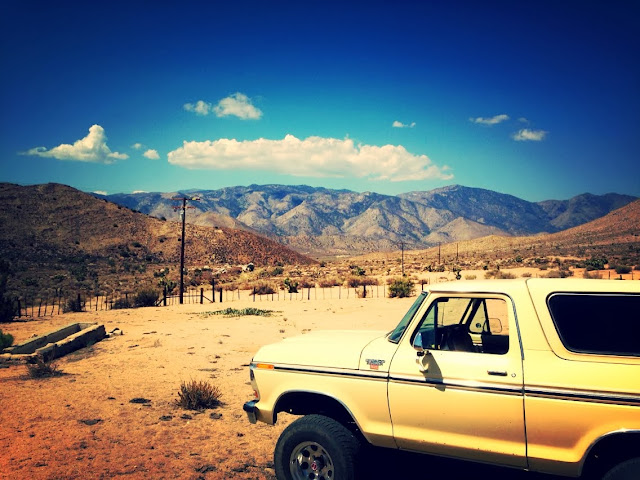 It's more than a toy though. My Bronco is the key to family togetherness. Well, one key, anyway.

The other day, since all the kids are in school, Ryan and I jumped in the thing and we drove up a local pass. If you squint really, really hard, you might see our house in the background. My Bronco can HANDLE it. Whatever it is.

Now, to get rid of that pesky vapor lock problem when it's hot and idle for too long... and the fact that it gets 9 mpg. But maybe that's good, because if it got better, it would so be my daily driver. So much style in that thing, compared to my Mazda. So much fun! It's a different way of driving, even on road. You take nothing for granted, and are a more active participant in the driving experience. The kids love it, of course. They get jealous when they find out we took it out without them.

Posted by Karrie at 9:50 AM No comments: 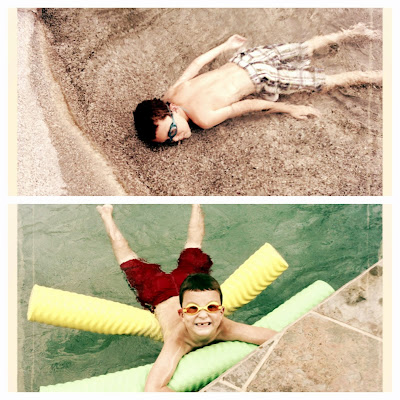 While Ryan and I were at Girl's Camp this year, the boy's stayed with my mom. She sent me these pictures that she took of them in the pool. The one of Will looking like he just washed ashore cracks me up. Ed loves goggles. I'm pretty sure I will have to buy all the kids their own set next year. I did not realize how important goggles were to them until they kept borrowing everyone else's, and then being all disappointed if they didn't have any.

Gotta love the beach entrance on my mom and dad's pool.
Posted by Karrie at 11:21 AM No comments:

Back to School...Back to Stuff

It's a first... all the kids are in school ALL DAY! We were all ready for the year to begin. I was super tired of the noise and mess. They were super tired of cleaning up their mess. Mostly though, they were BORED. It seems like we all love June, and the first two weeks of July. And then it happens... we all are ready to get back to a routine. My inquisitive children are ready for homework and socialization.

Jessie had no problems going to Kindergarten. Her teacher read a story, and we helped them get their breakfast. She kept looking back at me, and alternating between "You can leave already," and "Come stand by me." She will own that classroom in her own way by this afternoon. It's a small class, which I love!

Kacy was nervous to go to school on the middle school campus. Being super awesome parents we didn't take her around beforehand to find out what room she was going to be in. Friend Sara took pictures of the class lists (Kacy's grade is one of two grades that has enough students for two classes) so we knew who her teacher was going to be. I told her to just look for her friends and they can get lost together. (Actually, the middle school only has a little over 100 kids for four grades...so you can't get too lost.)

The boys? Well, they walked in, threw their backpacks by their new classroom doors, and headed to the playground. I am excited for my boys this year. Will doesn't have a combination class anymore, and there are only about 20 kids in his class. His teacher is super-duper, too. I think she will challenge him. Ed has our male teacher, and this was the grade that Will started doing better in school in. So, I'm hoping that Ed flourishes (and matures) as a second grader. He doesn't have academic issues... he has "sit in your chair and listen issues."

Now that my house is kid free... wait, you say. Isn't it empty? No, no it's not. Hubs is here with me. He had a hand surgery again (that I'll write about) and hasn't been to work this month. He took vacation last month. And then he USUALLY works afternoon shift, which means he's home in the morning with me. He's not asking me for snacks, or telling me did not leave his Otterpop wrapper on the living room floor, or showing me the injury he sustained because a) he stepped on a Lego or b) he was outside in the bushes with no shoes on. So, I guess he can stay home for awhile longer. At least until his hand heals up!

Last thing, I will not make promises about blogging any longer. I may have a little more time now, but no promises. Because whenever I write "I'm going to blog more!" it's just a bald faced lie. I don't intend for it to be a lie, but it just happens. So I quit promising. Everyone asks me what I'm going to do without my kids being here, and I say things like, "Shower when I want!" or "Maybe I'll exercise in peace!" And, those things are true. But mostly, I will work on my projects and try to stay organized. And I'm putting "blogging" on my list of projects.
Posted by Karrie at 10:46 AM No comments: