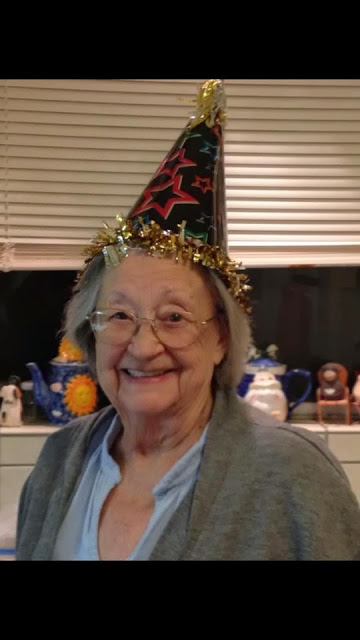 This is my grandma. My kids call her Granny. She passed away yesterday after a brief spell of health problems...three days! That's pretty good, considering her hope was always that she would go quickly, and not need to burden anyone with care. Two weeks ago today, I sat with her in the ER. She was retaining a lot of fluid and couldn't move herself around. We went to the dr. first, and then across the street to the ER. She was good, as long as she didn't have to move. We talked about the interesting people there. And oh boy, were they interesting. We had a really great nurse named Cayli who let us wait in the ER hallway instead of the crazy waiting room. We had Rosie the phlebotomist take her bloodwork...and she was the best I've ever seen. Except for the one guy who no longer works at PAL on Calloway...they were equal in skill. We sat there waiting for a bed so she could get faster working meds to drain out the fluid, and we watched a scary looking guy (who we thought only had one eye) walk in and out of his room, asking for more pain meds. I secretly nicknamed him "The Leprechaun," but don't tell him that. He looked like a very tall leprechaun with flaming red hair that was bald on top, and a red beard...and a squinty eye. He made me a little nervous, but I'm all paranoid that way. We observed all the different types of shoes people wear. I told her not to worry about her bed not being made, because she was worried about that. She stayed in the hospital a week, getting her electrolytes all balanced, and her excess fluid gone. She came home on Monday, was at her house on Tuesday, and then on Wednesday my mom called her and asked her if she needed anything from the store. When my mom got there with her milk and candy bar, she was having a stroke. Off to the ER she went, where the kids and I went down to visit her that night. She looked good! Tired, but good. Michael and I talked to her about taking care of the genealogy records, how we would digitize them and pass copies out to everyone. I told her another Ed story (her favorite stories...she just laughs and laughs). She ate a ton of food for dinner. We left. Kacy didn't get to see her though because she was at Camp Keep. The next day, she went home, and April texted me and told me when she went to see her that she didn't expect to see a zombie. Our granny was fading fast! She lasted three days after. My mom texted me at 10:46 that she had died. I was playing the piano for our primary program and didn't have my phone with me until about an hour later. I am happy for her, though. My grandma had quite the adventurous life, and she had a particularly rough go of things awhile back. You see, in the course of a year, her sister, brother, husband, and BFF from high school all passed away. She struggled with that a bit for a few years, and then resolved herself to referring to them as ignorant for leaving her behind. She was funny that way. She had a firm sense of the gospel and what was to come after death, and she wasn't at all scared to go. There really is nothing to be sad about...unless I am selfish. Which I am. Today I will take the time to mourn for myself, because I will miss her until I see her again.

I hate crying, but I get all teary eyed and snot faced when I think I won't see her again for a long time. I became very close to her over the last decade of my life. My kids are upset...I know that if they cry for her, I will join right in with them. (I hate that!) Anyways, I think we are going to have a celebration of her life. We are having a graveside service, which is what she wanted. But I think the kids and I are going to go grab some candy corn, circus peanuts, Eggo waffles, and some diet pepsi.

Things I will always remember about my grandma:
*her love of sugar was unequaled by many. Until she had to monitor her blood sugar, lost weight, and then ate in in "moderation." Lol- moderation. That's funny. She switched from regular pepsi to diet. Problem solved!

*wearing colanders on her head on her way out to the raspberry patch.

*saying things like, "It's better than a poke in the eye with a sharp stick," "If it was a snake it would've bit you," and "This too, shall pass."

*her calm demeanor at all times, only showing some anxiety in the last month or so of her life.

*her love of travelling and her family.

*her storied of riding her friends horse to 4-H and being bucked off every time you touched his flank...and having to walk home.

*she was bit by a rattlesnake on the knee once as a little girl, and she stayed at the doctors house for three weeks, making friends with the dog.

*her love of small, bugged eyed dogs. Like Chihuahuas and Wienie dogs. She liked all dogs, actually. She would always ask about the kids and then about my dogs.

*Her love of Cadillacs.

*She taught me the basics of sewing.

*She had a weird sense of color matching. Yes, it was weird. Like, legendary weird.

*She liked to gather the family together and play board games...but really I think the card games and board games were used as an excuse to bring out the crazies in all of us, and we would just end up laughing WAY TOO HARD at ourselves (and each other).

*her love of trinkets. Shopping with her killed me...because we were so opposite. She loved to look at EVERYTHING and loved to shop. I hate shopping. We still did it, though!

*she was a good secret keeper.

*she knew when to say something, and when not to. Something I need to work on.

*she loved music. Even when I played her a new song from my iPhone, she loved it, and thought is was the funniest song. I'll admit I hand chose it for her: it is "Family Reunion" by Corb Lund. I knew she would get it. And she totally did.

*her love of Ed. She loved all her family, but she got a real kick out of Ed. Jessie reminded her of herself, I think, being the youngest girls with two older brothers and an older sister. While her brother would put her on top of the chicken coop and then leave her, Jessie's older brothers put her on top of the cement mixer and left her. Ed makes for really great stories, and she always loved to hear his antics. She thought Kacy was so beautiful and smart, and that Will was smarter than us all (bad grades and all) and loved his curly hair.

*I will remember some good road trips I took with my grandpa and her.

*she loved her genealogy work, and could tell you all you needed to know about every fifth cousin you ever had. Which is awesome, by the way. Sometimes overwhelming, but awesome.

She is the most awesome grandma ever...so funny. I'm glad my kids were old enough to know her. I hope that by writing these things down, they will also remember her.